Doctor Who and the Ark in Space (novelisation)

Doctor Who and the Ark in Space

The Ark in Space

4 (given to later editions)

At a time in the far-off future, Earth has become uninhabitable. A selection of Humanity is placed, deep-frozen, in a fully automated space station, to await the day of their return to Earth...

Thousands of years later, DOCTOR WHO arrives. He finds things going suspiciously wrong, and the station under attack from the giant WIRRN, deadly creatures who, in their lust for power, now threaten the future of the whole Human Race...

FAR, FAR INTO THE FUTURE, THE EARTH HAS BECOME UNINHABITABLE. MANKIND HAS BEEN FROZEN AND PLACED ON BOARD A SPACE STATION TO AWAIT THE TIME WHEN THE PLANET CAN SUPPORT LIFE AGAIN...

The TARDIS materializes on board the deserted space station to find the body of one of the humans has been infested with the eggs of the hideous Wirrn, who plan to take over Earth. The humans have not woken on schedule and the future of mankind depends only on Noah and the Doctor...

Doctor Who - The Ark in Space, featuring Tom Baker in the role of the Doctor, was written by Robert Holmes. This novelization is by the late Ian Marter who played the part of the Doctor's companion Harry Sullivan from 1974-1975.

"Homo Sapiens... what an indomitable species... it is only a few million years since it crawled up out of the sea and learned to walk... a puny defenceless biped... it has survived flood, plague, famine, war... and now here it is out among the stars... awaiting a new life."

The survivors of a devastated future Earth lie in suspended animation on a great satellite. When Earth is safe again, they will awaken. But when the Doctor, Sarah and Harry arrive on the Terra Nova, they find the systems have failed and the humans never woke.

The Wirrn Queen has infiltrated the satellite, and laid her eggs inside one of the sleepers. As the first of the humans wake, they face an attack by the emerging Wirrn.

But not everyone is what they seem, and the only way the Doctor can discover the truth is by joining with the dead mind of the Wirrn Queen. The price of failure is the Doctor's death, and the end of humanity.

This novel is based on a Doctor Who story which was originally broadcast from 25 January to 15 February 1975.

Featuring the Fourth Doctor as played by Tom Baker, and his companions Sarah Jane Smith and Harry Sullivan.

1991, with new cover by Alister Pearson

This Target Book was released as an audiobook on 16 July 2015 complete and unabridged by BBC Audio and read by Jon Culshaw. 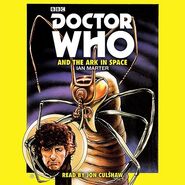