Doctor Who and the Androids of Tara (novelisation)

Doctor Who and the Androids of Tara

3 (given to later editions)

On a peaceful rural planet, where the colourful pageantry of old Ruritania mingles with ultra-modern Android technology, the Doctor becomes a kingmaker in spite of himself.

In his search for another segment of the Key to Time, the Doctor matches wits and swords with the evil Count Grendel – aided, of course, by Romana and the invaluable K9.

THE ANDROIDS OF TARA is a novel in the Key to Time Sequence. Read THE RIBOS OPERATION and THE STONES OF BLOOD available now.

THE POWER OF KROLL, THE ARMAGEDDON FACTOR.

Note: the "Coming soon" line is not on all printings.

In search of a segment of the Key to Time, the Doctor, Romana and K9 arrive on the planet Tara, whose population has long mastered the art of android engineering. Romana is apprehended by the ambitious Count Grendel, who seeks to overthrow the king in waiting, and the Doctor is coerced into helping those loyal to the crown. With Reynart locked away in Grendel's dungeons, the Doctor must perfect and android that can be crowned in his place. Yet Reynart is not the only one of Grendel's prisoners to have a double: the captive Princess Strella is Romana's doppelganger. A deadly game of cat and mouse ensues as Grendel seeks to destroy the Doctor in his race to the Taran throne.

A different version of this story, written especially by David Fisher, was released as an audiobook on 5 July 2012 by BBC Audio and read by John Leeson. 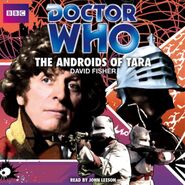