Doctor Who and the Abominable Snowmen (novelisation)

Doctor Who and the Abominable Snowmen

1 (given to later editions)

A single blow from the giant, hairy paw smashes the explorer to the ground. Terrified, he flees from the monster's glowing eyes and savage fangs...

Why are the peaceful Yeti now spreading death and destruction? And what is the secret behind the glowing cave on the mountain?

When DOCTOR WHO discovers that a long-dead friend is still alive, he knows why his visit to the lonely Himalayan monastery has led to a struggle to save the Earth!

"DOCTOR WHO, the children's own programme which adults adore..." Gerald Garrett, The Daily Sketch.

The Tibetan monks at the monastery of Det-sen are worried, frightened men. Many of their companions have been killed - and it seems the Yeti are the cause of all their troubles.

But normally the Yeti, giant man-like creatures living in the remotest peaks of the Himalayas, are seen only very rarely and are notoriously timid.

What is the explanation for their apparent transformation into ferocious brutes, monsters with glowing eyes and savage fangs who are spreading death and destruction in the isolated valley of peace?

When the Doctor arrives at the monastery, his first visit for three hundred years, he expects to be welcomed with open arms. But because of the mysterious killings, the reception that awaits him is anything but friendly...

"Light flooded into the tunnel, silhouetting the enormous shaggy figure in the cave mouth. With a blood-curdling roar, claws outstretched, it bore down on Jamie."

The Doctor has been to Det-Sen Monastery before and expects the welcome of a lifetime. But the Monastery is a very different place from when the Doctor last came. Fearing an attack at any moment by the legendary Yeti, the monks are prepared to defend themselves and see the Doctor as a threat.

The Doctor and his friends join forces with Travers, an English explorer out to prove the existence of the elusive abominable snowmen. But they soon discover that these Yeti are not the timid animals that Travers seeks. They are the unstoppable servants of an alien intelligence.

This novel is based on a Doctor Who story which was originally broadcast from 30 September-4 November 1967.

Featuring the Second Doctor as played by Patrick Troughton, and his companions Jamie and Victoria

This Target Book was released as an audiobook on 8 January 2009 complete and unabridged by BBC Audio and read by David Troughton. 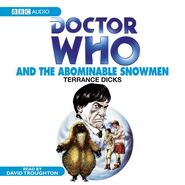