Doctor Who Night was a night of themed programmes that began with Introduction to the Night with Tom Baker as a future Doctor, broadcast from 8:55pm-12:30am on 13 November 1999 on BBC Two.[1] It was produced by BBC Manchester.

A special Dalek BBC Two ident was used throughout the evening between the programmes, as well as promos for the upcoming repeat of Spearhead from Space, the Doctor Who website and Doctor Who merchandise.

Documentary on the history of the show, narrated by Peter Jones.

Professor Tom Kirkwood talks about the possibility of regeneration.

A look at the various monsters that have appeared in the show.

Dr Jim Al-Khalili talks about the possibility of a TARDIS.

The final episode of this seven part story, "The Rescue".

A showing of the uncut 1996 TV movie, starring Paul McGann.

Between the programmes five CGI animated shorts featuring the Daleks were broadcast, each about 5-10 seconds in length. They were Dalek Grand Prix, Jelly Dalek, Squashed Dalek, Microwaved Dalek and Dalek Corridor.

(Note all titles are based on conjecture.)

Dalek Corridor
Add a photo to this gallery 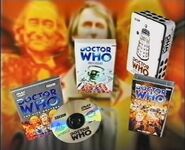 Retrieved from "https://tardis.fandom.com/wiki/Doctor_Who_Night_(1999)?oldid=2968579"
Community content is available under CC-BY-SA unless otherwise noted.