Edit
watch 01:36
We're Getting Mutants in the MCU - The Loop
Do you like this video?
Play Sound
This article needs to be updated.

Up to its 2017 closure, the exhibition was regularly updated to include props and monsters up to series 10.

These omissions are so great that the article's factual accuracy has been compromised. Check out the discussion page and revision history for further clues about what needs to be updated in this article.

The Doctor Who Experience was one of the largest and most ambitious Doctor Who exhibitions ever staged. Featuring props and costumes from throughout the franchise's history, it also featured one new and different element; an interactive story in which people could take part and become part of the adventure. The interactive story originally featured Matt Smith as the then-current Eleventh Doctor, but was replaced with one with Peter Capaldi as the Twelfth Doctor.

The Experience in Cardiff sat in the Cardiff Bay area, adjacent to Roath Lock, where Doctor Who was filmed from 2012 onwards. After a five-year run in Cardiff, the Experience closed on 9 September 2017 when its sub-lease from Cardiff Council expired.[1][2]

A huge exhibition with both interactive elements and exhibition elements from throughout Doctor Who's history: covering over 4000 square metres, this large exhibition covers all of Doctor Who history. With walk through parts of the exhibition and part where the audience becomes a part of the interactive story with Peter Capaldi as the Doctor taking part in interactive video! On launch, Steven Moffat said, "It will also be the first time that Doctor Who artefacts from all the show's 47 year history - classic and new - will be on display together."[3]

The visitors are being shown various artefacts (most from the Doctor's past) by a Node onboard Starship UK. Suddenly, alarms ring and the Eleventh Doctor appears on a screen. He explains he has been trapped inside the Pandorica II. He's angry at it being the same colour, and he believes having a second Pandorica to be cheating. The Doctor uses his sonic screwdriver to materialise the TARDIS nearby the visitors, whom the Doctor refers to as "Shoppers". The Shoppers pass a Smiler and enter the TARDIS. Several shoppers operate the TARDIS controls and the TARDIS lands in a Dalek flying saucer. The Supreme Dalek and two drone Daleks capture the shoppers, and a screen appears showing the Daleks. The Doctor appears on the screen, bargaining with the Daleks to release them. A few minutes later, Daleks that survived the destruction of the Crucible appear on the screen. The Dalek Paradigm believe those Daleks to be "impure". The Crucible Daleks counter that they are the children of Davros himself. They attack the Dalek Paradigm ship and, on the screen, a space battle rages. The Shoppers escape in a time corridor extruded by the Doctor using the TARDIS. They go through it and find themselves in a UNIT quarantine zone in Avenbury forest (as a sign at the end of this section shows) and find three Weeping Angels - one screaming, one calm and another one created by an image. The Doctor tells them to keep running and they run through another newly opened time corridor to the last stop, the location of the Pandorica II. The Doctor manage to free himself, and appears on screen back in the TARDIS. As they watch him, the Pandorica II opens and they fly through the Time Vortex. Daleks, Weeping Angels and Cybermen attack them, but eventually they escape them and the Shoppers are returned to Starship UK.

The visitors are being shown various artefacts (mostly from the Doctor's past) by a curator at a Gallifreyan Museum. While trying to make a connection with the Twelfth Doctor's TARDIS, it is attacked, and the Museum and the TARDIS are physically linked.

The visitors are then led through the museum wall into what appears to be the TARDIS' Arch-Recon room and on to a TARDIS control room (visitors then land the TARDIS on Skaro), through a Dalek infested corridor (similar in style to the Dalek Asylum)), a forest of Weeping Angels, and finally to 76 Totter's Lane on 23 November 1963, a date the Doctor says seems familiar.

The exhibition covers the whole gamut of Doctor Who dating all the way back to 1963, with exhibitions from every era of the programme. It contains a large number of original props that the BBC has had in storage, including some that have not featured in previous smaller exhibitions.

To celebrate the 50th anniversary of Doctor Who, for a limited time visitors were also given a tour of the Doctor Who studio featuring the permanent TARDIS set. The Twelfth Doctor's TARDIS set was available to tour after the filming of Series 8 had finished.

It was designed because we did conduct some research and asked fans what they wanted from a live Doctor Who experience. The number one response was 'I want to go inside the Tardis'.Philip Murphy[4]

The TARDIS Console room for the Ninth and Tenth Doctors

One of Sarah Jane Smith's costumes 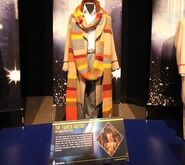