The Doctor Who Exhibition Blackpool was located at 111 Central Promenade, on the busy Golden Mile, a prime location for visitors. It ran for 11 years until the lease on the building it resided in expired.

Inside the Tardis Edit

The Doctor Who Exhibition at Blackpool, was first opened by Jon Pertwee and Elisabeth Sladen on 14 April 1974. From the outside, the huge crowds that gathered that day, could see only a blue police telephone box, next to a building, but once the doors were opened they found themselves descending a flight of stairs into a basement exhibition full of the most exciting monsters, aliens, props, costumes and models from the series.[source needed]

These originally included a Draconian, Silurian, Axon, Yeti, Cybermen, Alpha Centauri, Aggedor and several Eight Legs. The most popular exhibits were the Daleks in their Dalek cavern, originally displayed in their original form, and later with their creator Davros. In time, K9, Ice Warriors, Sontarans, Morbius, the Keeler-Krynoid, the Total Survival Suit from Kinda and many more joined the always thrilling displays.[source needed]

Visitors walked around a winding corridor with exhibits to either side, most that were changed annually, others that would become old favourites. Eventually they would arrive in the Tardis console room, where pictures of The Doctors looked down on a console that had "working" switches with flashing lights, a feature that also surrounded the main Dalek exhibits, which moved on a track as they yelled out words of extermination. The exhibition was left via a gift shop and a café. The Doctor Who Exhibition closed after the 1985 season, and was gutted out in early 1986.[source needed] 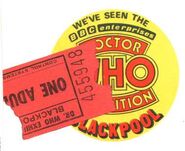 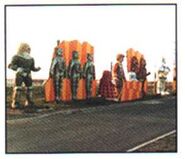