Doctor Who: Battles in Time is a trading card game and magazine published by GE Fabbri Ltd under licence from the BBC in the UK.

Following a successful regional trial of a Doctor Who magazine and trading cards in the UK, the title was launched nationally in September 2006 by GE Fabbri Ltd.

Originally planned as a work in fifty-two parts issued fortnightly, the title was expanded with the launch of the Devastator series of two-hundred and fifty new cards. These featured graphics from the recently aired Series Four, and extended the life of the magazine title.

Each issue of the magazine included the following regular features;

In addition to the regular fortnightly parts, a number of special issues were published, mostly to promote the launch of the next expansion set of trading cards.

Trading cards were issued with the magazine. They could be purchased separately from newsagent retailers or some specialist shops.

More details about trading cards can be found in:

Due to licensing restrictions, Battles in Time is one of a number of Doctor Who-related publications that has not been distributed beyond the British Isles. The availability of the BiT archive online in conjunction with Doctor Who DVD Files marks the first official international distribution of this content. 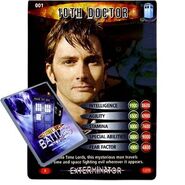 Retrieved from "https://tardis.fandom.com/wiki/Doctor_Who:_Battles_in_Time?oldid=2968242"
Community content is available under CC-BY-SA unless otherwise noted.