Demon Quest was the umbrella title of a five-story audio drama arc released from 2 September to 2 December of 2010 in CD and digital download formats by AudioGO. The series featured the Fourth Doctor, Mrs Wibbsey and Mike Yates. It was written by Paul Magrs.

The series was collected in a five-disc box set released 15 March 2011. It was later re-released in The Nest Cottage Chronicles.

The AudioGO series has continued with a third set in 2011, Serpent Crest.

Picking up events from Hornets' Nest, Mrs. Wibbsey has mistakenly sold a crucial piece of the TARDIS to someone. The Doctor goes hunting through time for the entity that has it. 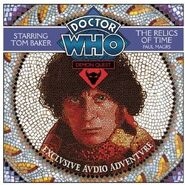 The Relics of Time 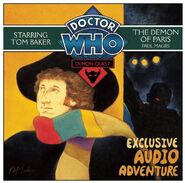 The Demon of Paris 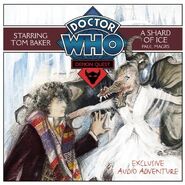 A Shard of Ice 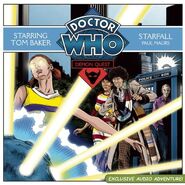 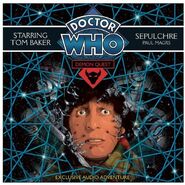 Retrieved from "https://tardis.fandom.com/wiki/Demon_Quest?oldid=3005684"
Community content is available under CC-BY-SA unless otherwise noted.