The Alexandria, the far future

Deep Time was the fifty-ninth novel in the BBC New Series Adventures series. It was written by Trevor Baxendale and featured the Twelfth Doctor and Clara Oswald.

It was the third and final entry in The Glamour Chronicles series, published in September 2015.

"I do hope you're all ready to be terrified!"

The Phaeron disappeared from the universe over a million years ago. They travelled among the stars using roads made from time and space, but left only relics behind. But what actually happened to the Phaeron? Some believe they were they eradicated by a superior force... Others claim they destroyed themselves.

Or were they in fact the victims of an even more hideous fate?

Because only the Doctor knows the true secret of the Phaeron: a monstrous secret so terrible and powerful that it must be buried in the deepest grave imaginable...

The Twelfth Doctor and Clara Oswald join a scientific expedition that hopes to find out what happened to the Phaeron, by travelling to a wormhole they made. 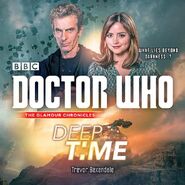