Death to the Daleks (novelisation)

'IT'S AS IF THE TARDIS IS DYING,' WHISPERED SARAH...

This Target Book was released as an audiobook on 3 March 2016 complete and unabridged by BBC Physical Audio and read by Jon Culshaw with Dalek voices by Nicholas Briggs. 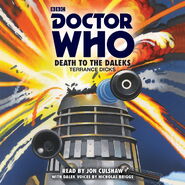