Dead of Winter was the forty-third novel in the BBC New Series Adventures series. It was written by James Goss and featured the Eleventh Doctor, Amy Pond and Rory Williams.

"The Dead are not alone. There is something in the mist and it talks to them."

In Dr Bloom's clinic at a remote spot on the Italian coast, at the end of the 18th century, nothing is ever quite what it seems. Maria is a lonely little girl with no one to play with. She writes letters to her mother from the isolated resort where she is staying. She tells of the pale English aristocrats and the mysterious Russian nobles and their attentive servants.

She tells of intrigue and secrets, and she tells of strange faceless figures that rise from the sea. She writes about the enigmatic Mrs Pond who arrives with her husband and her physician, and who will change everything. What she doesn't tell her mother is the truth that everyone knows and no one says – that the only people who come here do so to die.

In a remote clinic in 18th century Italy, a lonely girl writes to her mother. She tells of pale English aristocrats and mysterious Russian nobles. She tells of intrigues and secrets, and strange faceless figures that rise up from the sea. And she tells about the enigmatic Mrs Pond, who arrives with her husband and her trusted physician.

What the girl doesn't tell her mother is the truth that everyone at the clinic knows and no one says – that the only people who come here do so to die.

An adventure set in 18th century Italy, featuring the Eleventh Doctor as played by Matt Smith and his companions Amy and Rory. 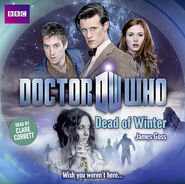 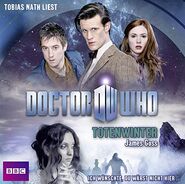