Dark Horizons was the fiftieth novel in the BBC New Series Adventures series. It was written by Jenny T. Colgan and featured the Eleventh Doctor.

"Now, you may or may not have noticed, but we appear to be on fire..."

On a windswept Northern shore, at the very tip of what will one day become Scotland, the islanders believe the worst they have to fear is a Viking attack. Then the burning comes. They cannot run from it. Water will not stop it. It consumes everything in its path — yet the burned still speak.

The Doctor is just looking for a game on the famous Lewis chess set. Instead he encounters a people under attack from a power they cannot possibly understand. They have no weapons, no strategy and no protection against a fire sent to engulf them all.

Add in some marauding Vikings with very bad timing, a kidnapped princess with a secret of her own and a TARDIS that seems to have developed an inexplicable fear of water, and they all have a battle on their hands. The islanders must take on a ruthless alien force in a world without technology; without communications; without tea that isn't made out of bark. Still at least they have the Doctor on their side... Don't they?

Just off the coast of the land that will one day become Scotland, a Viking ship transporting Freydis of Trondheim to marry Gissar Polvaderson is set alight by some creature that seems to burn on the surface of the water. The Eleventh Doctor arrives and swims towards the ship to rescue the survivors. Upon returning to shore, the Doctor convinces Corc, the chieftain of the village Lowith, to help the Vikings. Despite an aggressive protest from his oldest son Eoric, Corc agrees and the villagers and Vikings spend the night together.

During their stay at the village, Freydis befriends one of the Vikings named Henrik who agrees to be her guardian. Freydis also believes the Doctor is a God, Loki, who has plans for her. Eoric becomes bitter at his father and younger brother Luag for helping the Vikings. He expects them to attack the village soon and sulks, thinking about the death of his mother at Luag's birth. Some time later, as the Doctor attempts top call the creature out at sea to communicate with it, Eoric hears a whisper.

Soon, another Viking ship appears off the shore. The Doctor and Henrik rescue them before their ship can be set on fire and bring them back to shore. These Vikings were sent to follow Henrik's ship and ensure they delivered Freydis to Gissar instead of deserting with their valuable cargo. The leader, Erik, gives the order for his men to begin pillaging but Eoric, under the control of another entity, appears with mysterious and dangerous fire abilities and chants about continuing “the line”.

The creature inside Eoric begins attacking the Vikings but Luag approaches it and asks for his brother back. The Doctor grabs Luag before he is killed but Eoric explodes and burns up, leaving nothing but a charred corpse. Some of Erik's Vikings use this event as a distraction and they capture Freydis again, taking her away on their ship.

The Doctor collects Henrik for help and they leave in the TARDIS to pursue Erik and Freydis. On the ship, Freydis manages to escape the interior using a piece of scrap metal which she makes into a weapon. She threatens to slit Erik's throat in front of his men if they refuse to return her to the village. Just then, the TARDIS appears but it proves too heavy for the ship's flooring and breaks through, Freydis and Erik jumping after it and getting inside just in time. The TARDIS finally ends up at the bottom of the sea as the Doctor, for some reason, has trouble convincing her to dematerialise. The Cloister Bell sounds.

Putting on an old diving suit, the Doctor leaves to investigate the seabed after teaching Henrik and Freydis to pump the air into the suit. Despite the TARDIS air pocket, some water begins leaking in from the roof. Outside, the Doctor finds the Consciousness of Arill, an entity which feeds off electricity and was attracted to Earth by the electrical signals in human brains. Eoric was possessed to see if it was possible for the Arill to feed of this electricity. It is also the reason the TARDIS would not dematerialise, as the Arill could have fed off its power if it detected it. The Arill were unable to make contact with humans because it began burning after leaving the water..

Back in the TARDIS, Erik begins working at the controls to get the ship to leave. Henrik and Freydis fight him but not before the TARDIS begins to dematerialise – causing the doors to snap shut and the Doctor's air pipe to be cut. The TARDIS materialises again in the same place but the Doctor is trapped out on the ocean floor after the Arill leaves him. His extra lung capacity once noted to him by Martha Jones helps to keep him alive for longer than a human but not forever. Henrik finds the Doctor's space suit from Sanctuary Base 6 and uses it to bring the Doctor back to the TARDIS before he drowns. Back inside, the Doctor explains to them that the Arill are exploring space in search of electricity to feed on.

Back at the village, Eoric is given a funeral. No feast is held afterwards as the village is running low on food suplies. Afterwards, Henrik and Freydis share a kill while the Doctor comforts Luag by playing games with him despite the threat of a storm. Luag is then called for by his carer Brogan, who has taken over by the Arill like Eoric. Braan, Brogan's partner, kills her to end her suffering. A meeting is held concerning how the Arill should be dealt with. It is agreed that no fire's shall be started so the Arill cannot travel through them. Freydis becomes angry at the Doctor for not taking any action even though he is very powerful. The Doctor begins to formulate a plan to use the oncoming storm to allow the Arill to leave.

Later, the Doctor is teaching Luag how to play chess when Erik and his Vikings threaten once again to attack the village. Erik attempts to bargain with the villagers, saying that they will leave in peace if they are given Freydis, materials to repair their ship and some food. The Doctor, displaying his skills with a sword to Erik, prevents a fight and it is agreed that both sides will help find food before anyone can leave. However, one Viking drops a torch which slowly begins to set the grass on fire.

At the beach, the Doctor sends a message via Psychic paper to the Arill, giving them one more chance to stop killing people. The Arill respond by dispersing and appearing to surface from the water and burn up in an act of sacrifice to let the villagers live. Elsewhere, two of Erik's Vikings, Lars and Olaf light a fire despite the warnings they were given. The Arill, having faked their death, possess them and they begin setting fire to the village. The villagers rush to extinguish the flames. Erik and some other Vikings willingly embrace the Arill to become powerful. Corc too becomes hopeless, almost hysterical, and runs towards them but he is knocked back by Henrik. Henrik himself gets to close and is possessed too. Freydis wraps her hands in some clothes and pushed him back to the ocean where she holds him under. He is lifeless when Freydis surfaces him. The Vikings taken by the Arill burn up.

The Doctor is furious at the Arill for tricking him, even after he gave them a chance and offered them his help. He collects the village's swords from Corc and begins constructing a lightning rod as Luag tells the Doctor his ears are popping, meaning a storm is approaching.

The Doctor takes a coracle out to sea and begins speaking with the Arill again. He informs them that he still intends to help them and allows the Arill to feed on him. As they take him over, the storm arrives and the Doctor holds up the spear of swords. Lightning strikes it and the Arill are sent into the atmosphere. The Doctor collapses and the villagers watching from the coast presume him dead.

The Doctor wakes up in the coracle later. He still feels warm even though the weather is cold, some essence of the Arill remaining within him. When he returns to land, he has the remaining essence take on the form on Eoric and Brogan for a brief moment, allowing Corc, Luag and Braan to say a proper goodbye to their loved ones.

The Doctor stays at the village for a while longer, playing more chess with Luag and answering any final questions the villagers have. He gives Henrik, Freydis and the remaining Vikings help for when it comes to navigating their way back home once they repair the damage the TARDIS did to Erik's ship. Before leaving, he gives Henrik and Freydis an offer to travel with him but they turn it down. The Doctor says the last of his farewells before pressing down the accelerator and taking off. 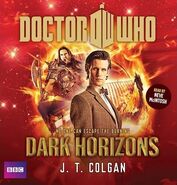