Planet of the Daleks

AUDIO: The Genocide Machine
AUDIO: Return of the Daleks
PROSE: Birth of a Legend
TV: Victory of the Daleks
AUDIO: A Thing of Guile

Their needs overrode all other orders and concerns in at least two missions. (AUDIO: The Genocide Machine, Return of the Daleks)

During the 22nd century Dalek invasion of Earth, Dalek scientists conducted the conversion of humans into Robomen. (PROSE: Doctor Who and the Dalek Invasion of Earth)

A Chief Scientist reported to the Black Dalek that the TARDIS had been located. (PROSE: The Chase)

In 2540, a scientific group of no more than twelve grey Daleks, led by a Dalek Section Leader, attempted to learn the technique of invisibility from the natives of Spiridon, operating from a laboratory. (TV: Planet of the Daleks)

Amongst the humanised Daleks of Kyrol, scientists such as Adellus were had green casings. (COMIC: Children of the Revolution)

During the Second Great Dalek Occupation, the Scientific Division oversaw the reoccupation of Spiridon, now known as Zaleria. They intended to finish the invisibility experiments and recover the buried army. Susan Mendes and Kalendorf, on a visit to inspire the slaves as part of Susan’s work as “the Angel of Mercy”, noticed the Division’s occupation was more brutal than the norm, including the deployment of Ogrons to brutally police the population. Kalendorf began working with local rebels and the Seventh Doctor to destroy the frozen army, however the scientists realised his absence and tortured the truth from Suz, despite standing orders from the Supreme for her protection. The Daleks surrounded Kalendorf and threatened to kill him unless the Doctor backed down from destroying the army with heat rays. The Doctor complied, knowing Kalendorf‘s importance to history, and agreed to work with the Daleks on invisibility. After years of servitude to the Scientific Division, the Doctor overheard reports of a rebellion on Yaldos and, realising history was playing out correctly, released a virus that infected all the Daleks on Spiridon with fatal light wave sickness. (AUDIO: Return of the Daleks)

Prior to the Last Great Time War, a Dalek Scientist was responsible for providing Dalek Sec, named by the Emperor as leader of the Cult of Skaro, with a new, unique casing composed of Metalert. (PROSE: Birth of a Legend)

As pointed out by the War Doctor on Asteroid Theta 12, Dalek Scientists during the Last Great Time War possessed distinctive markings on their casings, with blue-coloured domes and sensor globes. They sought to reverse-evolve the Dalek race and even denied their superior's orders to cancel the project due to it being impure. (AUDIO: A Thing of Guile)

The Scientist Daleks of the New Dalek Paradigm were ranked by their orange colour scheme. The original Scientist, along with the other original four Paradigm Daleks (the white Supreme, yellow Eternal, blue Strategist, and red Drone), were created when the three survivors of an encounter with the Doctor tricked the Eleventh Doctor into allowing them to activate the Progenitor device. It escaped through a time corridor with the others and went on to help rebuild the Daleks. (TV: Victory of the Daleks)

At least one Scientist Dalek, designated Unit Three, was captured and taken aboard Station 7. Several Scientist Daleks were part of the platoon led by Chief Strategist that attacked Station 7, with several other Strategists and Drones under its leadership. From the command ship, Scientists transmitted control signals calling all Robomen and Ogrons detained on the station to kill all humans, while others fed static electricity to the station's floors allowing captured Dalek technology to reactivate so they could salvage their equipment for analysis and repair. (COMIC: The Only Good Dalek)

A Scientist Dalek sent an alien family plummeting through time and space while attempting to collect all the Time orbs. The Scientist recruited many Strategist Daleks and Drones. It also recruited big armies of Cybermen and Silurians as a distraction for the Eleventh Doctor and Amy. (GAME: The Mazes of Time) 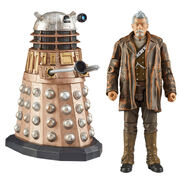