You may be looking for the titular item.

Corpse Marker was the twenty-seventh novel in the BBC Past Doctor Adventures series. It was written by Chris Boucher, released 29 November 1999 and featured the Fourth Doctor and Leela.

This novel was a sequel to the 1977 television story The Robots of Death.

Long ago and far away, the Doctor and Leela faced the Robots of Death...

To a society dependent on robots, the news that these benign, tireless, obedient labourers could be turned into killers would cause panic. So it was kept a secret. In Kaldor City, only the three survivors of the Sandminer massacre know the truth. But now, several years later, they are beginning to show signs of mental breakdown. And once again, the robots are being programmed to kill. Can the dead genius Taren Capel possibly be involved in this new outrage?

Worst of all, this time the deadly robots are not confined to a Sandminer. This time they are loose in Kaldor City. And this time, unless the Doctor and Leela can stop them, they really will destroy the world.

The Doctor and Leela arrive on the planet Kaldor, where they find a society dependent on benign and obedient robots. But they have faced these robots before, on a huge Sandminer in the Kaldor desert, and know they are not always harmless servants.

The only other people who know the truth are the three survivors from that Sandminer — and now they are being picked off one by one. The twisted genius behind that massacre is dead, but someone is developing a new, deadlier breed of robots. This time, unless the Doctor and Leela can stop them, they really will destroy the world.

Threatened by upstarts from the common classes, such as Topmaster Kiy Uvanov, Company Executives hire Carnell, a noted Psychostrategist, to devise a plan to undermine the people's trust in the current generation of robots, allowing the Company to introduce a new cyborg class with a minimum of fuss and ensuring the panic-stricken populace will accept the stability offered by the traditional ruling families. However, Carnell fails to factor the Doctor and Leela's presence into account and soon the plan goes completely wrong. As the executives who hired Carnell are now out to make him a scapegoat, he strikes a deal with Uvanov, giving Uvanov the leverage he needs to ensure a smooth transfer of power to him and his followers. 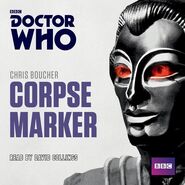 Retrieved from "https://tardis.fandom.com/wiki/Corpse_Marker_(novel)?oldid=2730437"
Community content is available under CC-BY-SA unless otherwise noted.