Classic Doctors, New Monsters: Volume Two was a full cast audio anthology released in July 2017 by Big Finish Productions. It featured the Fourth, Fifth, Sixth and Eighth Doctors alongside monsters from the 2005 revival of the television series.

Night of the Vashta Nerada by John Dorney

Funworld was set to be the happiest planet in the galaxy. A planet of joy, of euphoria, of laughter and delight. Except construction was marred by reports of a predator and then, a few days before opening, all communication ceased.

Owner Georgia Donnelly is desperate to open the resort and has hired Amanda Steele's crew to find out what happened on the planet. They're the best. But even they might not be up to the task.

Joined by the Doctor and being picked off one by one, they slowly start to realise that something terrifying lurks in the shadows.

Empire of the Racnoss by Scott Handcock

When a distress call rips the TARDIS from the Vortex, dragging it back through time, it arrives in the midst of a conflict between Gallifrey and an ancient foe.

The Doctor, as ever, wants to help, but in returning a wounded combatant home, he becomes further and further entangled in a web of deceit and recrimination. A web spun by an eight-legged Empress and her minions...

The Empire of the Racnoss is at war, and wherever he stands, the Doctor is on the wrong side.

The Carrionite Curse by Simon Guerrier

Katy Bell returns to her Midlands home to find strange goings-on at the buskers fair. A witch trial in the 1980s. A bonfire ready to be lit...

Luckily, a colourful visitor is already investigating, and the local vicar, Katy's dad, is versed in tales of the macabre. Terrifying forces are on the loose, and the town hall holds a secret. There is black magic in the Black Country, and the Doctor has the name of his enemy on the tip of his tongue...

Something wicked this way comes.

Day of the Vashta Nerada by Matt Fitton

As the Time War rages, Cardinal Ollistra of Gallifrey seeks to create ever more dangerous weapons to deploy against the enemy.

When the Doctor stumbles across Synthesis Station, he discovers that the Time Lords have sponsored a project to weaponise already-lethal creatures. But in doing so, Eva Morrison and her team have unwittingly used a colony of Vashta Nerada with a very unfortunate history of humanoid contact.

The Doctor finds himself leading a desperate race for survival, in which the shadows may be the least of their worries...

Empire of the Racnoss[edit | edit source] 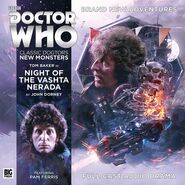 Night of the Vashta Nerada 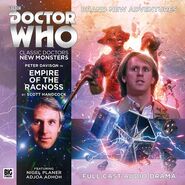 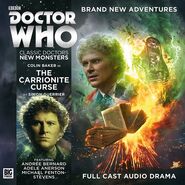 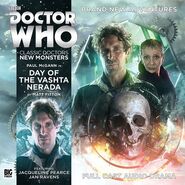 Day of the Vashta Nerada