All six regular actors returned voicing their characters. The series also saw the return of Ace and the Daleks, after their previous visit to Coal Hill in 1988's Remembrance of the Daleks. Patrick Ness, who created the show and wrote its first series, was involved with the storyline and scripts of the audio series, despite not writing any of the stories.[1][2]

While "Up All Night" wasn't used as the theme tune for the series, the stories contained the Class theme, which played over the closing credits of the TV stories.

Because the licence was acquired before the show's cancellation, the audio stories for Volume One and Volume Two couldn't develop the cliffhanger of the first series' final episode The Lost, as they might have created a conflict with a potential second series, which never came to be. Thus, all six stories being developed for the first audio release needed to take place within the events of the show's first series.[1] 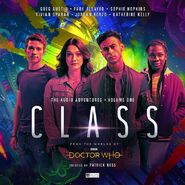 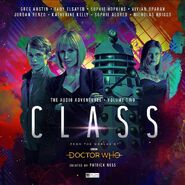 Retrieved from "https://tardis.fandom.com/wiki/Class:_The_Audio_Adventures?oldid=2851743"
Community content is available under CC-BY-SA unless otherwise noted.