City of Death by James Goss was a novelisation of the TV story of the same name written under the pen name David Agnew by Douglas Adams and Graham Williams during a last minute rewrite of the script A Gamble With Time written by David Fisher. It was the first novelisation since Shada.

Gareth Roberts, who wrote the Shada novelisation, was originally meant to write that of City of Death, but dropped out during writing.

"You're tinkering with time. That's always a bad idea unless you know what you're doing."

The Doctor takes Romana for a holiday in Paris – a city which, like a fine wine, has a bouquet all its own. Especially if you visit during one of the vintage years. But the TARDIS takes them to 1979, a table-wine year, a year whose vintage is soured by cracks – not in their wine glasses but in the very fabric of time itself.

Soon the Time Lords are embroiled in an audacious alien scheme which encompasses home-made time machines, the theft of the Mona Lisa, the resurrection of the much-feared Jagaroth race, and the beginning (and quite possibly the end) of all life on Earth.

Aided by British private detective Duggan, whose speciality is thumping people, the Doctor and Romana must thwart the machinations of the suave, mysterious Count Scarlioni – all twelve of him – if the human race has any chance of survival.

But then, the Doctor's holidays tend to turn out a bit like this.

Deviations from the televised story[]

This novel was released as an audiobook on 21 May 2015 complete and unabridged by BBC Audio and read by Lalla Ward. 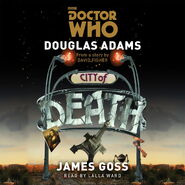