Cephalopods were a type of animal which included octopi, squid, and other related creatures.

In the 51st century, cephalopods (or at least cephalopod-humanoids) may interbreed with humans. Ianto Jones expressed of his very near-human boyfriend, Jack Harkness, fear of a boyfriend leaving him equally for "men, women, or cephalopods." (TWN: The House that Jack Built) 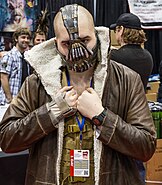 Animus, a Great Old One
St--5e23powerofkroll.jpg
The Kroll

Rutan
Mirebeast.jpg
Mire Beast
Add a photo to this gallery
Retrieved from "https://tardis.fandom.com/wiki/Cephalopod?oldid=400108"
Community content is available under CC-BY-SA unless otherwise noted.