76 (given to later editions)

Castrovalva was a novelisation based on the 1982 television serial Castrovalva.

Still weak and confused after his fourth regeneration, the Doctor retreats to Castrovalva to recuperate.

But Castrovalva is not the haven of peace and tranquility the Doctor and his companions are seeking. Far from being able to rest quietly, the unsuspecting time-travellers are caught up once again in the evil machinations of the Master.

Only an act of supreme self-sacrifice will enable them to escape the maniacal lunacy of the renegade Time Lord.

THE MASTER LEANED BACK, PERMITTING HIMSELF A THIN CHUCKLE THAT FLOATED AWAY INTO A WHISPER. 'OH NO YOU CAN'T ESCAPE. YO'RE MINE, ADRIC, MINE - UNTIL WE HAVE COMPLETED OUR FINAL TASK...'

The TARDIS, controlled by the Master, is rushing towards Event One and imminent destruction; Adric and his computational powers are being manipulated to the Master's own ends.

But the Doctor has been weakened by regeneration and the travellers attempt to travel to peaceful Castrovalva unaware of the web that has been spun by the renegade Time Lord...

Doctor Who - Castrovalva marks the beginning of Peter Davison's tenure of the role of the Doctor and was written by Christopher H. Bidmead, who was script editor of the series during its eighteenth season.

This Target Book was released as an audiobook on 4 March 2010 complete and unabridged by BBC Audio and read by Peter Davison.

It was later released as part of The Master Collection. 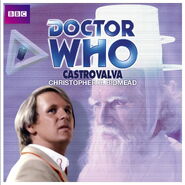