At a spaceport on planet Inter Minor, travelling aliens Vorg and Shirna arrive and set up their show. Although Vorg's intentions aren't hostile, the representatives of the ruling class of Inter Minor display a cultural dislike of things that they view as alien or unnecessary, and their tribunal — Kalik, Orum, and their superior Pletrac — are suspicious and deny them an entrance visa.

Vorg pulls the "bit of bric-a-brac" (the TARDIS) out but sticks it back inside the machine. Later, Vorg shows the tribunal of mistrusting natives, Pletrac, Kalik and Orum, some of the creatures inside the scope, including Ogrons, Cybermen, Tellurians and Drashigs, huge deadly carnivores. Vorg explains how inside the miniscope the miniaturised creatures live in miniature versions of their natural habitats. As the tribunal members watch the events within the human environment, Vorg shows them the machine's capabilities by adjusting a dial which amplifies the specimens' hostility.

The tribunal on Inter Minor chooses to eradicate the illegal specimens inside the scope, but the eradicator only damages the machine. The locals are disturbed that their great weapon was unable to destroy the scope, and they suppose that it's actually a plot by their enemies. Suspicious that the scope contains an illegal transmitter, Orum searches the machine and pulls out the mini-TARDIS. Soon it expands to its normal size, horrifying the Tribunal.

Cultural references from the real world 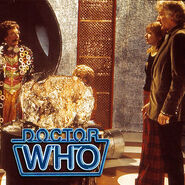 Retrieved from "https://tardis.fandom.com/wiki/Carnival_of_Monsters_(TV_story)?oldid=2762016"
Community content is available under CC-BY-SA unless otherwise noted.