Tardis
Register
Don't have an account?
Sign In
Advertisement
in: Audio stubs, Rassilon audio stories, Stories set in the Divergent Universe,
and 4 more

You may be looking for the titular place.

Caerdroia was the sixty-third story in Big Finish's monthly range. It was written by Lloyd Rose and featured Paul McGann as the Eighth Doctor, India Fisher as Charlotte Pollard, Conrad Westmaas as C'rizz, Stephen Perring as The Kro'ka and Don Warrington as Rassilon.

It was essentially the "beginning of the end" of the Divergent Universe arc. Significantly, it depicted the Doctor's recovery of the TARDIS, which had been absent from the Eighth Doctor's adventures since AUDIO: Scherzo.

The story began to "pay off" the Divergent Universe arc by explaining things like the Interzone, the Kro'ka's motivations and fears, how a universe without time worked and the Divergence itself.

From a production standpoint, it was notable for its highly complex sound design, which had to depict abstract environments, including the Doctor's own mind. It also afforded Paul McGann the chance to play three different versions of his Doctor, each primarily exhibiting what Charley called a "mode" of his character. Thus, the story had one Doctor that was a bit surly and paranoid, another that was bouncy and excitable and another that was more or less the "regular" Eighth Doctor.

The story was written by Lloyd Rose, giving Caerdroia the distinction of being the only full length performed Doctor Who story authored by an American woman.

Self-exiled to a new universe, separated from the TARDIS, opposed and manipulated by the Divergence and their agent the Kro'ka, the Eighth Doctor has been struggling to work out the nature of the cosmic game in which he's an unwilling pawn. Now, at last, he has a chance to find the answer — and regain the TARDIS!

Threatened and desperate, the Kro'ka abandons his behind-the-scenes machinations to confront the Doctor directly. But will both of them lose their way in the maze of the strange world in which they find themselves? A world in which a clock may have a cuckoo but no hands, a labyrinth imprisoning a paradox, and a Garden of Curiosities reveals something the Doctor has never seen before.

As the Doctor faces these challenges, Charley and C'rizz provide valuable help. But with the TARDIS itself at stake, the Doctor reaches deep inside himself to find some surprising new allies.

The Doctor, Charley and C'rizz are resting in the interzone when they are approached by the Kro'ka who attempts to enter the Doctor's mind. The Doctor takes advantage of this and uses it to extract information from the Kro'ka. The Doctor ascertains that there is a central travel hub across the travel zones called Caedroia. The Doctor is also experiencing time sickness which should not happen in a timeless universe. Using this to sense a portal, the Doctor, Charley and C'rizz enter Caedroia. Upon arrival in a field full of cows with bells, the Doctor splits into three embodiments with different segments of his personality. Charlie refers to the two additional Doctors as the "Eeyore" and "Tigger" ones based on their respective dispositsions.

The team now splits up and explore different parts of Caedroia. Charley and the darker parts embodiment of the Doctor explore a giant cuckoo clock without hands (an odd object to be in the Divergent Universe which has no concept of time); the jollier part of the Doctor and C'rizz go to the Gardens of Curiosities where they see a rabbit like creature spinning and escape from an Eutermesan monster called an Obelat (which they do not see) in the Garden of Curiosities; while the other Doctor has to find his way around a bueracratic office fulled with identical workers who are only interested in their Kafkaesque form-filling processes. Eventually, through opening various doors their paths all meet in a giant labyrinth where they must avoid a minotaur.

The Doctors, Charley and C'rizz meet Waylan who explains that the labyrinth is a prison for his people after the Divergents came. The way out is locked by a complex code. The original Doctor, Charley and C'rizz leave the other two Doctors two solve it. These two modes work out that the puzzle is in fact the security system for the Tardis. The original Doctor goes to the offices again but walks into one the Kro'ka's traps. There the Kro'ka tries to torture the Doctor but is held back from the Doctor's threats of revealing the Kro'ka's trespasses against the Divergents to them and that determines the presence of time must been that the TARDIS is nearby.

Charley and C'rizz after failing to find the Doctor, notice that the people of the land don't notice them and infer that the Kro'ka has been shielding the Divergents from the TARDIS crew's presence. Again, they find themselves in the labyrinth and help the other two Doctors out. After escaping from the maze, the "Tigger" encounters the Kro'ka who traps him inside the cuckoo clock. The "Eeyore" Doctor then appears, enters the Kro'ka's mind and inflicts his pain. Having all gathered together again the Doctors realise that the musical elements of the world - The musical book in The Garden of Curiosities, the bells on the cows and the cuckoo clock - is a message from a TARDIS. They initiate "contact" with each other and work out that the Tardis is at the centre of the labyrinth.

The Doctor, Charley and C'rizz go to the TARDIS and the three Doctors recombine into one. The TARDIS crew leave, drawing a plan to defeat the Divergents. 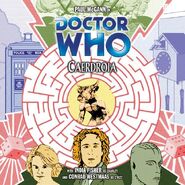 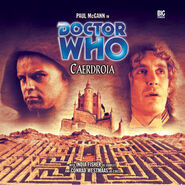