The Bow Tie Game, also called Matt Smith Bow Tie Game[1], was a pastime game put out by the BBC on the Doctor Who Instagram account on the Stories section on the 30 August, 2018.

The main goal was to tap/click on the screen to stop the bow tie from moving around and hoping it would be in the right location on the Eleventh Doctor/Matt Smith.[2]

The bow tie will start spinning slowly around until tapped on. It will stop at whatever direction the ends are pointing in.

The bow tie will spin faster than before. The same challenge as before applies.

The bow tie will now move around all over the screen until tapped on. It will stop at whatever spot it is located in.

The bow tie will move around faster than before. The same challenge as before applies.

Message from BBC Doctor Who: Thanks for playing! Send us a message and let us know how you got on! 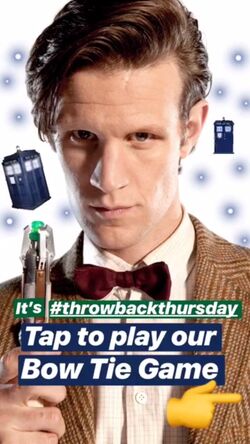