You may be looking for the titular organisation.

Border Princes was the second release in the BBC Torchwood Novels series.

The End of the World began on a Thursday night in October, just after eight in the evening...

The Amok is driving people out of their minds, turning them into zombies and causing riots in the streets. A solitary diner leaves a Cardiff restaurant, his mission to protect the Principal leading him to a secret base beneath a water tower. Everyone has a headache; there's something in Davey Morgan's shed; and the church of St Mary-in-the-Dust, demolished in 1840, has reappeared - though it's not due until 2011. Torchwood seem to be out of their depth. What will all this mean for the romance between Torchwood's newest members?

Captain Jack Harkness has something more to worry about: an alarm, an early warning, given to mankind and held — inert — by Torchwood for 108 years. And now it's flashing. Something is coming. Or something is already here. 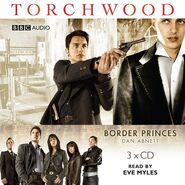