Based on a novel by Nigel Robinson; adapted for audio by Jacqueline Rayner

You may wish to consult Birthright (disambiguation) for other, similarly-named pages.

Birthright was the fourth Bernice Summerfield audio drama produced by Big Finish Productions. It was the second in a trilogy of stories known as the "Time Ring Trilogy" whose arc element was the use of Bernice Summerfield and Jason Kane's wedding time rings, given to them when they were married in Happy Endings.

This was the first story to be adapted that was a Virgin New Adventures novel, rather than part of the Virgin Bernice Summerfield New Adventures, which featured Bernice without the Doctor. The original Birthright novel featured elements which have been adapted here. While the Doctor did not feature heavily in the original novel, Ace did. Ace's role is now taken by Jason Kane.

Though adapted from a Seventh Doctor story, the work marks the Sixth Doctor actor Colin Baker's first work for Big Finish. This is also the first Big Finish release featuring an actor behind one of the televised Doctors. Colin Baker doesn't play the Doctor here though, which means he, like David Tennant after him, is an actor who played a televised Doctor but whose first work for Big Finish was not in the role of the Doctor.

Continuing the pattern from the previous story, the photos of Lisa Bowerman and Colin Baker are featured on the original audio cover.

"If the human race were to die tomorrow, insect life would carry on regardless. Insects might even become the dominant species!"

Thrown off the Time Path, Professor Bernice Summerfield is trapped in early 20th century London, with only one of the pair of time rings she needs to get home. At the other end of time, her ex-husband Jason Kane finds himself stranded on a dead world, where the queen of the Charrl demands his help to save her dying race. But all he wants to do is find Benny, and return to the 26th century.

In the East End a series of grisly murders has been committed — is this the work of the legendary Springheel Jack or, as Benny suspects, something even more sinister? Allied with a Russian detective, she determines to find out. But the master of a grand order of sorcerers has other plans for her... 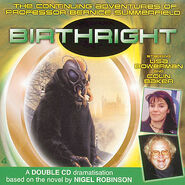 Retrieved from "https://tardis.fandom.com/wiki/Birthright_(audio_story)?oldid=2813442"
Community content is available under CC-BY-SA unless otherwise noted.