Birth of a Renegade (short story)

Birth of a Renegade

Birth of a Renegade was a short prose story published in 1983 by the Radio Times in its Doctor Who 20th Anniversary Special. It was intended to reveal Susan Foreman's origin.

These accounts of Susan's origins have not been reflected in any other source. The story states that Susan is not in fact related to the Doctor, but is instead a descendant of Rassilon. This is a retcon which goes against the intent of the original programme makers who devised the character of Susan as the Doctor's granddaughter. A different account of Susan's origins, in which she is not exactly the Doctor's granddaughter, but instead the granddaughter of the Other, who was later reincarnated as the Doctor, is found in the novel Lungbarrow.

The impetus to say that Susan was not actually the Doctor's descendant came from the belief, widely held among fans in the 1980s and 1990s, that the Doctor is asexual, and thus could not have any actual offspring. This belief was also the official policy of producer John Nathan-Turner, who was often quoted as saying, "There's no hanky-panky in the TARDIS." Thus, this retcon by script editor Eric Saward was in tune with the intentions of the 1980s production team, even if it was at odds with the intentions of the original 1960s production team.

In the 21st century revival of Doctor Who, the Doctor has been depicted as a sexual and occasionally flirtatious being, and he has referred to himself as having been a father (in TV: The Empty Child, Fear Her and The Doctor's Daughter), so the notion of him also being a grandfather is generally no longer considered an issue. In the 2013 episode TV: The Rings of Akhaten, the Doctor, for the first time since the revival began, explicitly states that he has a granddaughter.

Tegan is not happy when the Fifth Doctor decides to answer a distress call from Sector 19, in the spiral of Alpha 4, a remote area on the fringe of a supernova. Arriving near the source of the signal, the Doctor is disturbed to find it is coming from an enormous battle cruiser. The cruiser appears undamaged. Unlike other warships, it doesn't carry any identifying insignia or identification. The Doctor, Tegan and Turlough are even more alarmed when they find that the TARDIS is being drawn to the cruiser by a tractor beam that is somehow using the TARDIS' own power against it.

The Doctor, working under the console, shuts off the TARDIS's power for a moment. There is enough energy left to dematerialise when the break in power releases the TARDIS from the tractor beam. The TARDIS materialises safely onboard the battle cruiser. They explore the vast craft in near total darkness — bar the minuscule light from the Doctor's pen torch. The Doctor, Tegan and Turlough are blinded and disorientated by a bright light when a door opens. A moment later they are prisoners of three Cybermen who appear to be assisting the Master.

The Master reveals that the battle cruiser is his TARDIS, disguised as a battle cruiser (with his working chameleon circuit) to suit the Cybermen. The Master's plan is to bring the Time Lords to their knees, not by war but by "securing power by legally exploiting the constitution!" As they are marched through the TARDIS corridors, the Master talks of Gallifrey's past. He recounts the final corrupt days of Lord President Pundat the Third. The Master remembers the Doctor as a crusty, eccentric man, one of the finest TARDIS engineers ever.

The Master remembers more than the Doctor, who realises he has had selective memories wiped — just as the Master had told him. The Master explains that students revolted against Pundat the Third but were ruthlessly put down. The students wanted to replace Pundat's rule (in which the Lord President chose his own successor) with Rassilon's Law, hereditary rule by a descendant of Rassilon.

The students had tried to recruit the Doctor, but he he had decided to side with the status quo, the constitution and Lord Pundat. When Pundat died of stress soon after the revolt, his chosen successor was the evil Chancellor Slann. The students had found the last of Lord Rassilon's descendants: Lady Larn, a seven-year old child adopted by Councillor Brolin. They decided on a second coup. Yet in trying to convert the Doctor, the students were overheard. The Doctor, innocent of the students' revolt, was too highly respected to be terminated like the other students. It was decided to wipe parts of his memory.

Bloody reprisals against the students followed, and the Doctor decided to leave Gallifrey in a TARDIS. As it happened, the Lady Larn was hiding in the same TARDIS that the Doctor stole; the Doctor knew her as Susan and she affectionately called him "grandfather".

The Master, Tegan rightly guesses, was behind both student uprisings. Believing the students ready for the second, he assassinated Lord President Slann. However, the students weren't ready and the Master fled.

Once more, claims the Master, Gallifrey is leaderless and politically unstable, the people are crying out for leadership, for a descendant of Rassilon. The Master plans to return with his army of Cybermen (to whom he has promised the knowledge of time travel) and rule with Susan as his puppet. However, the Master realises that Doctor, his biggest adversary, must be disposed of first.

In the stalemate the Doctor leads his companions back to the TARDIS. With the Master's exposed roundels in the corridor draining the energy to maintain the vast battle cruiser, Susan stops and fires the Eliminator. The damage destablises the Master's TARDIS. The Doctor, Tegan, Turlough and Susan just make the safety of the Doctor's TARDIS. The Doctor sets the co-ordinates to return Susan home. Outside, the Master is consumed by hate as the walls around him collapse and his TARDIS disintegrates, but the Doctor believes that he hasn't seen the end of him. 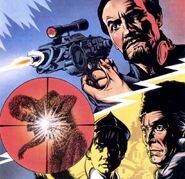 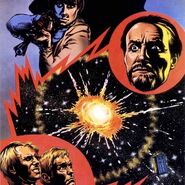