Ancients of the Universe

Big Bang Generation was the fifty-eighth novel in the BBC New Series Adventures series. It was written by Gary Russell and featured the Twelfth Doctor and Bernice Summerfield.

It was the second entry in The Glamour Chronicles series, published in September 2015.

Notably, it marked the first official time that Benny met an incarnation of the Doctor from the revived series.

"I'm an archaeologist, but probably not the one you were expecting."

Imagine everyone's surprise when a time portal opens up in Sydney Cove. Imagine their shock as a massive pyramid now sits beside the Harbour Bridge, inconveniently blocking Port Jackson and glowing with energy. Imagine their fear as Cyrrus "the mobster" Globb, Professor Horace Jaanson and an alien assassin called Kik arrive to claim the glowing pyramid. Finally imagine everyone's dismay when they are followed by a bunch of con artists out to spring their greatest grift yet.

This gang consists of Legs (the sexy comedian), Dog Boy (providing protection and firepower), Shortie (handling logistics), Da Trowel (in charge of excavation and history) and their leader, Doc (busy making sure the universe isn't destroyed in an explosion that makes the Big Bang look like a damp squib).

And when someone accidentally reawakens the Ancients of the Universe — which, Doc reckons, wasn't the wisest or best-judged of actions — things get a whole lot more complicated...

References to the real world[] 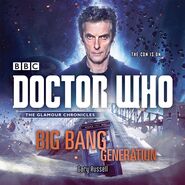