The BBC tv Special Effects Exhibition opened on 1 December 1972, at the Science Museum in South Kensington, London. It was also known as the BBC tv Visual Effects exhibition.

One notable aspect of the exhibition's title is the lower case spelling of "tv" — using a lower case "tv" was how the BBC's logo was written at that time.

Like the BBC's previous exhibitions of television special effects, in the 1960s, it focused on programmes across the entire range of BBC Television's drama and light entertainment output. But this was the first such event to have a significant proportion of its exhibits drawn from Doctor Who.[1]

The exhibition ran at the Science Museum for six months, until May 1973, drawing huge numbers of visitors despite the restricted opening hours forced on the Museum by constant power cuts caused by a long running Industrial Dispute (see Notes, below). It then went on a very successful tour in the North of England.

The great success of the exhibition was adjudged to be due to the Doctor Who elements included in it. Although the Science Museum was also exhibiting items from the U.S. space program, and the 1969-72 Moon landings, including the Lunar Module and the Lunar Rover, the TARDIS console replica and original monster costumes were the most popular items.[2] This led BBC Enterprises to create two permanent Doctor Who exhibitions in 1974: at Longleat Safari Park in Wiltshire (which ran every year until 2003); and on Blackpool's Golden Mile (running every year until 1985, from the Easter holidays until the end of the Illuminations in October, and attracting 250,000 visitors a year in the 1970s, at the height of its popularity). Some elements of the Blackpool exhibition survived, from 1994 until 2003, on display in the public areas of the DAPOL Doctor Who factory at Llangollen in North Wales, which attracted 50,000 visitors a year to its exhibition, The Doctor Who Experience.[3]

In 1972 the BBC set up an exhibition at the Science Museum in London, showcasing visual effects created by BBC television's Special Effects department (which was then more traditionally known within the Corporation as theVisual Effects Department). A small, self-contained section of the exhibition was given over entirely to effects, props and monsters which had been created for Doctor Who; but the majority of the exhibition was devoted to visual effects created for the full range of the BBC's drama and light entertainment shows.

The Doctor Who exhibit's entrance resembled a Police Box, and within was featured a mock-up of the TARDIS control room, designed as a circular chamber surrounding the many-sided central console. On display around the walls (which, complete with inset roundels, were modelled on those of the TARDIS interior sets used in the television series) were a selection of monster costumes from the series, including a Cyberman, an Axon, an Ogron, and a Draconian. In point of fact, at the exhibition's opening in December 1972 the Draconians had not as yet been seen in the tv series. And as the series was in full production during 1972 and 1973, none of these elements - except the monster costumes - were actually from the series, but were all specially built for the exhibition.

For many visitors to the exhibit, the star attraction was the display of two Daleks. These were given pride of place, in a static display which simulated a view through the open TARDIS doors, looking out upon an alien world. In December 1972, with production underway on the television serial Planet of the Daleks , no genuine Dalek props were available either, so new ones had to be constructed for the exhibition. These were built by Charlie Lumm and Tony Oxley of the BBC's Visual Effects department, and were slightly smaller - with the front section more pronounced - than a genuine Dalek prop, but otherwise were accurate replicas.

They were constructed principally of wood, but with the dome manufactured from fibreglass. Tony Oxley motorised the gun stalk to move, and also the dome and eyestalk (which could move and pivot), and he enabled the gun's central core to mimic firing by extending and retracting. The Daleks' most recent television outing, Day of the Daleks (1972) - which had been their first ever television appearance in colour - had featured a gold Dalek. One Dalek at the exhibition was accordingly matched to this, being given a gold livery with silver collars and slats, plus black hemispheres. The other Dalek was given a traditional 1960s livery: all-silver, with blue hemispheres.[4]

A collection of demonstrations and models created by the Visual Effects department was also on display around the walls (for details see Notable Elements, below). 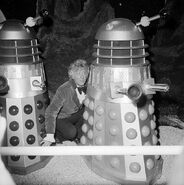 The Doctor and the Daleks. 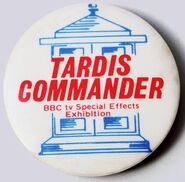 TARDIS Commander badge given away to patrons.

Retrieved from "https://tardis.fandom.com/wiki/BBC_tv_Special_Effects_Exhibition?oldid=2779593"
Community content is available under CC-BY-SA unless otherwise noted.