Autonomy was the thirty-fifth novel in the BBC New Series Adventures series. It was written by Daniel Blythe and featured the Tenth Doctor.

Blythe had previously written for the Virgin New Adventures.

Hyperville is 2013's top hi-tech 24 hour entertainment complex — a sprawling palace of fun under one massive roof. You can go shopping, or experience the excitement of Doomcastle, WinterZone, or Wild West World. But things are about to get a lot more exciting — and dangerous...

What unspeakable horror is lurking on Level Zero of Hyperville? And what will happen when the entire complex goes over to Central Computer Control?

For years, the Nestene Consciousness has been waiting and planning, recovering from its wounds. But now is ready, and its deadly plastic Autons are already in place around the complex. Now more than ever, visiting Hyperville will be an unforgettable experience. 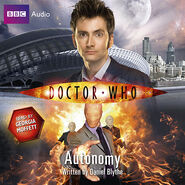