Attack of the Cybermen

Attack of the Cybermen

Attack of the Cybermen was the first serial of season 22 of Doctor Who.

The story also returned to Telos, the setting of the Second Doctor TV story The Tomb of the Cybermen, also reintroducing its Cyber-Controller, albeit redesigned to fit with the then-current Cyberman design. In the process, Attack of the Cybermen attempted to reconcile Telos's depiction as the Cybermen's homeworld in Tomb of the Cybermen with the claim in TV: The Tenth Planet that the Cyberman homeworld: in this case, Telos was redefined as a planet temporarily colonised by the Mondasian Cybermen, with a new native Telosian race, the Cryons, being introduced. Ironically, PROSE: Doctor Who and the Cybermen had earlier posited the opposite explanation, purporting that Telos was the original Cyberman homeworld and that Mondas has been the first of their colony-planets. TV: The Doctor Falls would later posit yet a third incompatible explanation, alleging that Cybermen evolved separately on Mondas and Telos through parallel evolution.

This episode is also notable for featuring the first televised instance where the chameleon circuit within the Doctor's TARDIS is shown operational - since the very first episode of the series, it was known to have suffered from a fault that left it in the shape of a police box. Now temporarily repaired, the outer shell of the TARDIS is witnessed changing shape for the first time on-screen. However, the repairs are imperfect and the TARDIS assumes random forms against the Doctor's will, some of which do not blend well with the places it lands and make it hard to tell where to re-enter the machine. The chameleon circuit soon breaks down and the TARDIS becomes locked in its police box form once again.

It was also a prime example of an occasion where the Doctor greatly misjudged someone's pure motives, namely he assumed that Lytton was working with the Cybermen instead of against them. His actions here indirectly led to Lytton's death, and the Doctor stated that he's never quite misjudged someone that badly before, and swore never to do so again.

While trying to fix the TARDIS's chameleon circuit, the Sixth Doctor returns to Foreman's Yard on Totter's Lane in 1985, where he meets his old enemies the Cybermen. They have come from the future to change history by sending Halley's Comet crashing into Earth. Gustave Lytton, last seen working for the Daleks, is involved in the Cybermen's plot. Is Lytton working for the Cybermen, himself or someone else?

Two workmen are inspecting a London sewer. They find a new brick wall where none should be. One of them wanders off and vanishes, while his colleague is attacked by an unseen assailant.

The Sixth Doctor is performing repairs to the TARDIS' chameleon circuit, something he has meant to do for years, but Peri is worried that he is over-exerting himself following his recent regeneration. She suggests he get some rest. He responds that she could also use some relaxation and steers the TARDIS towards Earth. Something begins to draw them off course.

Back in London, the stranded mercenary Lytton now leads a small gang of criminals. They are planning their next job, a diamond heist. One man, Russell, is sent to procure explosives, but instead phones someone to tell them what Lytton is planning.

The TARDIS is undamaged and now following Halley's Comet towards Earth in 1985. The Doctor decides to investigate what affected their flight, despite Peri's misgivings about the comet's reputation as a signal of impending doom. Lytton's gang enters the sewers via a prepared entrance concealed beneath a garage, planning to blow their way into the diamond vault from below. Before he joins them, Lytton adjusts a piece of advanced technology, while his two police allies patrol the street.

The TARDIS lands in the scrapyard at 76 Totter's Lane, having tracked a distress signal nearby. To Peri's amusement, the chameleon circuit alters the appearance to a painted french dresser, inconsistent with a junkyard. As the Doctor and Peri search for the signal's source, they are silently stalked by the policemen.

In the sewers, Russell hears someone following the four thieves. Lytton orders Payne to remain behind to "deal" with whoever is following them while he, Russell and Griffiths proceed into the dark tunnels. Payne is attacked and killed by the shadowy assailant. When he realises the distress signal is relayed via multiple points in the city, the Doctor decides someone must be observing the transmitter to determine when help arrives. The TARDIS, now a pipe organ, materialises at the garage. When he sees the absurd form his TARDIS has assumed, the frustrated Doctor remarks, "This is getting ridiculous". In a moment of whimsy, he plays the opening notes of J. S. Bach's "Toccata and Fugue in D minor", before Peri puts him back on task. The Doctor and Peri find the sewer entrance and the armed policemen, whom they overcome before venturing into the sewers. In the dark, they soon find Payne's body.

When Lytton's gang reach the newly built wall, Griffiths begins to knock down some of the old brickwork to reach the vault. When the black figure appears in the tunnel, Russell flees while Griffiths shoots at it. Lytton forces Griffiths not to panic as the new wall slides back to reveal Cybermen in a hidden command centre. Lytton surrenders. He explains his extra-terrestrial nature to the Cyber-Leader and offers to serve the Cyber race. The leader states the Cyber-Controller on Telos will determine their fate.

On Telos, a group of partially cyber-converted prisoners toil in a quarry under Cyberman guards. Three of the prisoners attempt an escape, killing a Cyberman in the process. Only two make it out alive. The men, Bates and Stratton, need a third to operate the ship they plan to leave Telos in. Despite this setback, they continue with their plan and head for the Cyber-control building. They accost a Cyber-scout on the way and decapitate him, planning to hollow out his head for a disguise.

Russell finds the Doctor and Peri. He reveals he is an undercover police officer. The Doctor disarms him and learns he was investigating Lytton, who appeared suddenly a year earlier and committed several daring crimes with great skill to build his transmitter and who the Doctor had dealt with before during an incident with the Daleks. They return to the TARDIS, disabling the black Cyber-scout with a sonic lance on the way. However, some Cybermen are already inside the TARDIS and kill Russell. The leader, flanked by several other Cybermen, herds Lytton and Griffiths in the ship. The leader orders one of the Cybermen to destroy Peri at once...

The Doctor agrees to co-operate with the Cybermen if Peri is spared on the word of the leader and Cyber-Controller, whom the Doctor believed dead. He sets the TARDIS coordinates for Telos and is placed in another room with Peri, Griffiths and Lytton. Lytton explains that the Cybermen have captured a timeship that landed on Telos and have great plans for that ship and the TARDIS as well. The Doctor asks how Lytton knows so much about Telos and the Cybermen's plans, but he does not answer. The Doctor explains to Peri and Griffiths that the Cybermen came to Telos and annihilated the native Cryons to use their refrigerated cities to store cyber troops after the destruction of Mondas, partially at the Doctor's hand, in 1986.

The Doctor sabotages the navigational controls with the sonic lance, causing the TARDIS to land in the catacombs, rather than Cyber-control, whereupon it assumes the shape of a gateway. The Cybermen are attacked by a rogue Cyberman, one of many driven insane by faulty tombs. The distraction allows Peri, Lytton and Griffiths to escape. Peri is rescued by Cryon freedom fighters, more of whom find Lytton and Griffiths, explaining that they answered Lytton's distress call and he manipulated the Cybermen into bringing him to Telos. The Cryons have hired him to help them stop the Cybermen from destroying Telos when they have revived all their troops and left. Lytton's mission is to steal the time vessel to prevent the Controller's plan from succeeding. He, in turn, needs Griffiths to keep him alive long enough to make it to the ship, paying him with a fortune in diamonds, which are very common on Telos.

Meanwhile, the Doctor is confined in a cold storage room, where he meets a Cryon prisoner, Flast. Flast says a few Cryons survived the Cybermen purges. They are fighting a guerrilla war, sabotaging the tombs to delay the revivals. She outlines the Cybermen's plan to prevent Mondas' destruction by travelling back in the time vessel and diverting Halley's Comet into Earth before Mondas has absorbed too much energy.

Lytton and Griffiths track down the two escaped prisoners outside the city and convince the groups to ally themselves with each other to capture the time vessel, which needs at least three crewmen to operate. Lytton explains that the ship is their only hope and that it will arrive soon. They head into a hidden tunnel, which leads to Cyber-control. As they approach the landing pad, Lytton is captured by a Cyberman patrol while the others continue without him.

The Doctor is outraged at the Cybermen's plan. Saving Mondas would contravene the Laws of Time. He is surprised the Time Lords are not doing something to stop it. He realises it must have been his own people who sent the TARDIS off course and manipulated him into place to be their agent yet again. Flast shows the Doctor what is in the storeroom - boxes of vastial, a common Telosian mineral, highly volatile above freezing. The Doctor uses a small amount to escape the room and kill the guard, leaving his sonic lance with Flast. She cannot leave the room without being boiled alive by the above-zero temperatures in the corridor, but volunteers to use the lance to detonate the vastial and destroy cyber-control.

Lytton is tortured by the Cyber-controller for information before being forced to undergo cyber-conversion. The Doctor and Peri make their way separately to the TARDIS where to lure the Cyberman guards out, the Doctor activates a distress beacon on the body of a dead Cyberman. Before being forced into the corridor and perishing, Flast hides the sonic lance in a box of vastial where it slowly warms up. When the time vessel lands at the platform, the would-be hijackers try to board it but are mercilessly cut down by the Cybermen inside. As the guards leave the TARDIS, the Cryons destroy them at the cost of their leader's life.

The new Cryon leader, Rost, urges the Doctor to leave before Flast's explosion is triggered. The Doctor prepares to go, but Peri urges him to go back and rescue Lytton who, for once, was helping the right side. The TARDIS materialises in the conversion centre, taking the form of a police box, but it is too late to save Lytton, who begs the Doctor to kill him. The Cyber-Controller arrives to stop the Doctor, who surreptitiously puts a scalpel in Lytton's hand. Lytton waits until the Controller is next to him and stabs him in the arm, which is the distraction the Doctor needs. He takes the Controller's weapon and kills the Leader, the Lieutenant and the Controller himself, but not before Lytton is killed. The TARDIS leaves moments before Cyber-control explodes, leaving the Doctor to reflect on his misjudgment of Lytton. 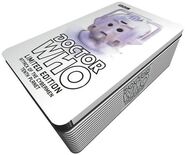 Attack Of The Cybermen was released on DVD in the UK in March 2009.