At Childhood's End was a novel written by Sophie Aldred, detailing a meeting between Ace McShane and the Thirteenth Doctor.

Once, a girl called Ace travelled the universe with the Doctor – until, in the wake of a terrible tragedy they parted company. Decades later, she is known as Dorothy McShane, the reclusive millionaire philanthropist who heads global organisation A Charitable Earth.

And Dorothy is haunted by terrible nightmares, vivid dreams that begin just as scores of young runaways are vanishing from the dark alleyways of London. Could the disappearances be linked to sightings of sinister creatures lurking in the city shadows? Why has an alien satellite entered a secret orbit around the Moon?

Investigating the satellite with Ryan, Graham and Yaz, the Doctor is thrown together with Ace once more. Together they must unravel a malevolent plot that will cost thousands of lives. But can the Doctor atone for her past incarnation’s behaviour – and how much must Ace sacrifice to win victory not only for herself, but for the Earth?

Justine, a homeless teenager in London, is kidnapped by hooded figures.

Dorothy McShane wakes in a cold sweat from a recurring nightmare that she's had every day of the week so far. She tries to remember it, but can't. Fustrated, she gets out of bed and flicks through channels on her television. She sees Kim Fortune hosting his own show. He's interviewing a girl and her parents, describing how their daughter was almost kidnapped by aliens. The girl describes experiencing a nightmare eerily similar to her own, but what shakes Dorothoy is that she lives in Perivale, near where she lived when she was taken in a time storm to Iceworld.

Dorothy drives to Chantelle's flat in her Hypergreen, and tells her about what she discovered. Chantelle tells her that she wasn't the first to ask around, and that she has heard some strange noises at night, not to mention the large amount of rats that there suddenly is. Sanaul calls her and asks her to turn on the television, where every channel is showing footage of a UFO that has appeared around the moon. Calling Will Buckland on the way, she drives to her workshop, picking up the Squidget before arriving at the British Space Defence Centre in Devesham.

Will meets her at the Centre, and takes her to a hangar at the back which houses the Virgil. She lets the Squidget take control of the machine, but it told by Sam O'Connor, the Mission Controller, that she needs to take a full medical examination before she goes up into space with Wil.

This novel was released as an audiobook on 6 February 2020 complete and unabridged by BBC Audio and read by Sophie Aldred. 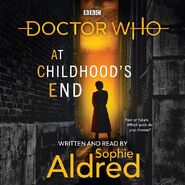