80 (given to later editions)

When the Doctor returns to Gallifrey, he learns that his bio data extract has been stolen from the Time Lords' master computer known as the Matrix.

The bio data extract is a detailed description of the Doctor's molecular structure - and this information, in the wrong hands, could be exploited with disastrous effect.

The Gallifreyan High Council believe that anti-matter will be infiltrated into the universe as a result of the theft. In order to render the information useless, they decide the Doctor must die...

'HELLO,' SIAD THE DOCTOR CHEERFULLY. 'I'M THE DOCTOR.' MAXIL RAISED HIS STASER PISTOL AND SHOT HIM DOWN.

On his return to Gallifrey, the Doctor learns that his bio data extract has been stolen from the Time Lords' master computer, the Matrix. The Gallifreyan High Council believe that anti-matter will be infiltrated into the universe as a result of the theft. The information must be rendered useless - the Doctor must die.

First broadcast in 1983, this is the first story since The Three Doctors to feature Omega, a bitter Gallifreyan exiled forever from this universe. This novelization by Terrance Dicks was adapted from the original script by Johnny Byrne.

This Target Book was released as an audiobook on 3 June 2021 complete and unabridged by BBC Audio and read by Geoffrey Beevers. 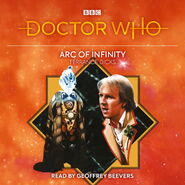