Apollo 23 was the thirty-seventh novel in the BBC New Series Adventures series. It was written by Justin Richards and featured the Eleventh Doctor and Amy Pond.

"Houston – we have a problem."

An astronaut in full spacesuit appears out of thin air in a busy shopping centre. Maybe it's a publicity stunt.

A photo shows an immaculately-dressed woman in her best shoes lying dead at the edge of a crater on the dark side of the moon – beside her beloved dog 'Poochie'. Maybe it's a hoax.

But as the Doctor and Amy find out, these are just minor events in a sinister plan to take over every human being on earth. The plot centres on a secret military base on the moon – that's where Amy and the TARDIS are.

The Doctor is back on Earth, and without the TARDIS there's no way he can get to the moon to save Amy and defeat the aliens.

Or is there? The Doctor discovers one last great secret that could save humanity: Apollo 23. 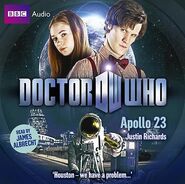