Anti-Genesis was a full cast audio anthology released on 17 December 2019 by Big Finish Productions. It was the fourth release in The War Master audio series and featured Derek Jacobi as the War Master, with Mark Gatiss as the Unbound Master, Seán Carlsen as Narvin and Nicholas Briggs as the Daleks.

A brand-new four-part adventure featuring the Master's exploits in the Time War.

In a Time War, there is a crime that not even the Daleks would dare consider. But the Master has more than considered – and he is ready to commit...

When his TARDIS returns to Gallifrey carrying his corpse, a chain of events ensues that will change established history. Old friendships will be destroyed and dark alliances formed, as the Master exploits a terrifying truth.

Even for the two most powerful races, time can be rewritten.

4.1 From the Flames by Nicholas Briggs

After the Master's TARDIS returns his remains to Gallifrey, in accordance with his final wishes, an intricate plot begins to change the nature of the universe forever. But even in death the Master threatens life. And only CIA Coordinator Narvin can hope to stop him.

As the Master inflitrates the Kaled scientific elite, the Time Lords seek to counter his interference. But while Narvin and President Livia try to stabilise the past, a new and horrifying future dawns in the wastelands of ancient Skaro.

With all known history threatened, the Daleks take desperate action to preserve their established legacy. When they cross dimensions to recruit an alternative incarnation of the Master, an uneasy alliance is formed... But can either side truly trust the other?

4.4 He Who Wins by Nicholas Briggs

The Master has achieved an ultimate victory. But at what cost? 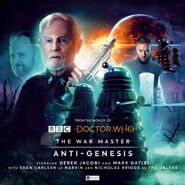 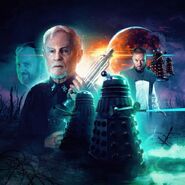 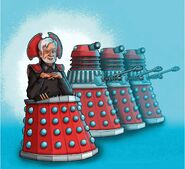 Art by Jamie Lenman in DWM 547