Needs to be Adventures in a Pocket Universe (series)

Adventures in a Pocket Universe — 1999

Adventures in a Pocket Universe was a short series of audio dramas released by BBV Productions under their "Audio Adventures in Time and Space" banner. They featured John Leeson and Lalla Ward as K9 and his Mistress.

The two stories in the series, The Choice and The Search, were intended to form a sequel to Warriors' Gate, in which Romana II and K9 were left in E-Space. Though BBV Productions was able to secure the original actors for those two roles and the rights to K9 from Bob Baker and Dave Martin, they had no rights to the character of Romana or the concept of E-Space, so in the audios, K9 instead travels with an unnamed woman in Ecto-Space. 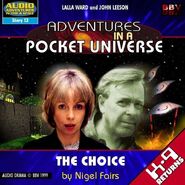 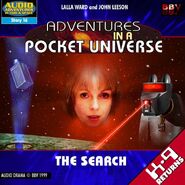 The Search
Retrieved from "https://tardis.fandom.com/wiki/Adventures_in_a_Pocket_Universe?oldid=2957451"
Community content is available under CC-BY-SA unless otherwise noted.