The Destroyer
The Pitless Terror
Arch-Horror

Abslom Daak was a thuggish human criminal who embarked on a crazed vendetta against the Daleks after they took the life of his only love. Before their extinction, the Daleks came to view Daak as one of their most dangerous singular enemies. Many noted that Daak was able to cause even the Daleks to fear for their lives, and, as Daak himself noted, only the Doctor seemed to compete with his total kill-count.

Born on Earth in the 26th century, Daak led a rough life. Early in his life, he knew a woman named Selene. Together, they were business partners with Vol Mercurius, defrauding pan-galactic shippers of four billion. However, Daak was betrayed when Vol Mercurius ran away, taking the money and Selene with him. The memory of Selene "[ate] away at [Daak's] soul", turning him into a killer. By the end, Daak noted that he hated everyone but her. (COMIC: Abslom Daak... Dalek Killer, Star Tigers) At some point, Daak had been a knight of the Grand Order of Oberon. (PROSE: The Secret Lives of Monsters)

Daak was convicted of "twenty-three charges of murder, pillage, piracy, massacre and other crimes too horrible to bring to the public attention". At the close of his trial, he was given the choice between death by vaporisation or exile as a Dalek Killer. He chose the latter. Out of a selection of many weapons, his choice was his trusted chainsword. Daak was informed that he was expected to live little more than two hours, and cut his guiding robot in half before jumping through the transport.

Daak was transported to the primitive planet Mazam in the Dalek Empire, the humanoid rulers of which appeased the Daleks occupying their world. He destroyed a Dalek task force single-handedly and rescued the Princess Taiyin, with whom he fell in love. Taiyin decided to strike out against her masters. She was killed by a Dalek survivor that Daak had overlooked, leaving Daak grief-stricken and vowing to exterminate every Dalek in the galaxy. (COMIC: Abslom Daak... Dalek Killer)

During his travels, Daak was often followed closely by Bonapart Devizes, who had a fascination with Dalek artefacts and would collect those left behind by Daak's adventures. Daak did not think highly of the man, at one point later calling him "the pepperpot pervert". (COMIC: Downtime)

Daak found satisfaction in discovering that the Daleks he hunted would recognise and flee from his presence. (COMIC: Obsessions) Indeed, many said that Daak was one of the first people to make a Dalek feel total fear. (COMIC: Downtime)

With Taiyin's body alongside him in cryogenic suspension (he hoped that medical technology might one day revive her) Daak joined with the Draconian Prince Salander, Vol Mercurius and an Ice Warrior, Harma, (whom he found in a sort of murder emporium, which was designed for people who would pay to be killed, knocked him out, then dragged him out the door while ignoring his complaints that that would be against his word) who came to travel the galaxy in a small ship known as the Kill-Wagon. (COMIC: Star Tigers) He continued to kill Daleks, often armed only with an energy pistol and his personal chainsword. Fond of the bottle, Daak remained a tough-talking ruffian, almost psychotically eager for battle. (COMIC: Nemesis of the Daleks)

He met the Seventh Doctor (who had heard of Daak) on the planet Hell after the Kill-Wagon had crashed there while investigating Dalek activity. He thought his fellow Star Tigers had died in the crash. They found the Daleks mining a deadly gas, helkogen, out of the planet for Operation Genocide, taking it up to an orbital Dalek Death Wheel to build a genocide machine. Daak sacrificed himself by flying a captured Dalek hovercraft into the Wheel's reactor core, destroying the Wheel and the Dalek's plans. (COMIC: Nemesis of the Daleks)

Daak was plucked out of time just before his moment of death by a Dalek faction led by the Supreme Dalek and was used to locate and lead the Seventh Doctor into a trap. Eventually he discovered that he had been tricked, and aided the Doctor, the Doctor's companion Bernice ("Benny") Summerfield (another native of the 26th century left without parents by the Daleks) and his old allies (who he learned had survived the crash) in defeating the Daleks once more. On Spiridon, Daak attacked Davros' chair with his chainsword, crippling him. With help from Benny, Daak got over his fixation with Taiyin, but then nursed a crush on Bernice. (COMIC: Emperor of the Daleks!) Despite this source's suggestion that Daak had left behind his former love emotionally and literally, Daak was later seen to still be travelling with her capsule during his travels. (COMIC: The Then and the Now)

Daak received an invitation to come to Cheldon Bonniface on 24 April 2010 for Bernice Summerfield's wedding to Jason Kane, but, perhaps fortunately for all concerned, he turned it down, stating he still hadn't killed every Dalek in the galaxy. (PROSE: Happy Endings)

On the planet Phaester Osiris, Daak tried, without luck, to come onto Sarah Jane Smith while she visited that world with the Fourth Doctor. (PROSE: Scarab of Death)

Daak once knew a Time Agent. During their "final meeting", the pair got in a fight, which ended with the Agent's arm being cut off and taken by Daak, including his vortex manipulator. (COMIC: The Then and the Now)

Within and without the Time War

After the end of the Time War, Daak suddenly became frustrated with the discovery that there were little to no Daleks left in the universe to kill or seek revenge on.

Daak became a regular at Clundanius XI, where he would often get into bar fights. Daak eventually became known as a fighter with many names such as "the Destroyer" and "the Pitless Terror", and would become very irritated at the mere mention of the Daleks. On one occasion, Daak eviscerated twenty Vervoids for looking at him funny, which was ironic since Vervoids were not creatures known to have eyes. (COMIC: Downtime)

After years of not seeing a single Dalek, Daak decided that he had to move on with his life. Taking up his former occupation of a murdering assassin, Daak took up a job to bring the Doctor to a judge for a trial. Using his vortex manipulator, Daak tracked down the Eleventh Doctor and occupied his TARDIS.

Daak threatened the Doctor and his companions. In response to this, the TARDIS hid Taiyin within its structure. Daak was then forced to join the Doctor in his quest to discover who killed the Cyclors. (COMIC: The Then and the Now)

Daak was shot by the Squire after the Volatix inside her awoke and turned on the Doctor and his friends. (COMIC: Fast Asleep) Daak managed to stumble to his feet and deliver an attack to the Squire. Due to Daak's weakened state, the Squire was able to dodge the attack and shot him once more. (COMIC: Gently Pulls the Strings) Daak saw a vision of Taiyin, who hooked him up to a machine that healed his wounds. Daak then exited the TARDIS on a speeder and ran over the Squire. The Doctor then granted Daak his greatest wish, and used the Then and the Now to send him into the Last Great Time War, where he could slay Daleks to his heart's content. (COMIC: Physician, Heal Thyself)

Mainly because of the death of Taiyin, Daak had an obsession with killing every Dalek in the galaxy. (COMIC: Abslom Daak... Dalek Killer) However, when this feat had essentially been achieved by someone else, he felt a strong lack of purpose. (COMIC: The Then and the Now) His desire to kill as many Daleks as possible was so strong that he become one of the only known beings to purposefully enter the Time War from outside of the Time lock protecting the universe from it. (COMIC: Physician, Heal Thyself)

When cyborg hacker Psi was attempting to protect Clara Oswald from the Teller, he ensured that it would focus on his guilt by uploading the memories of some of the worst criminals in history, one of them being Abslom Daak. (TV: Time Heist)

A cryogenically frozen Daak was revived by Ace in 2573. Ace thought of him as the only Daak and, with Benny, tried to stop him from dying because, thinking him the real, original Daak and not a clone, they knew that Daak would die on Hell. He was killed while saving Ace from the gestalt intelligence named Pool. (PROSE: Deceit)

At least one of Daak's ancestors was also a criminal and, in 2009, was found guilty by Intersol for crimes against New Devonia. (COMIC: The Crimson Hand) 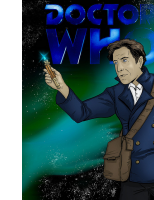