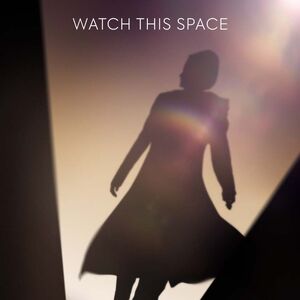 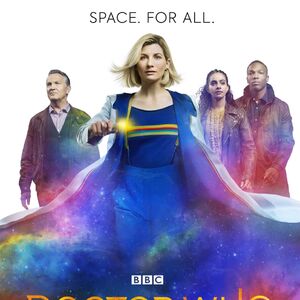 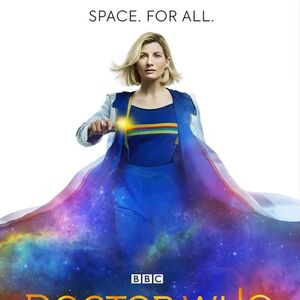 I don't get it. He wrote some great episodes when others were head-writer of the show. For example, he wrote The Hungry Earth/Cold Blood, Dinosaurs on a Spaceship, and The Power of Three. These are great episodes, two of them I watched super recently (Dinosaurs and Power of Three). They aren't the best episodes ever, but they're good episodes.

WHAT HAPPENED WITH SERIES 11 AND 12?? I don't think that they're bad (well, I do. Just not as bad as everyone says they are). But they don't FEEL like Doctor Who. They just feel like some other show. And it's not the actors. They're great. I just don't know what happened.

Recently, the Series 12 boxset was released along with the 2019 special Resolution. But I’m not sure as to which series that special belongs to as I assume it was made under the Series 11 production as it was broadcast only 23 days after the finale, but it seems like the BBC have made it part of Series 12 instead of 11.

If Resolution is the New Year’s Special for Series 11, why is it on the Series 12 Blu-Ray & DVD?

Me (finally) accepting Twelve was leaving the TARDIS: 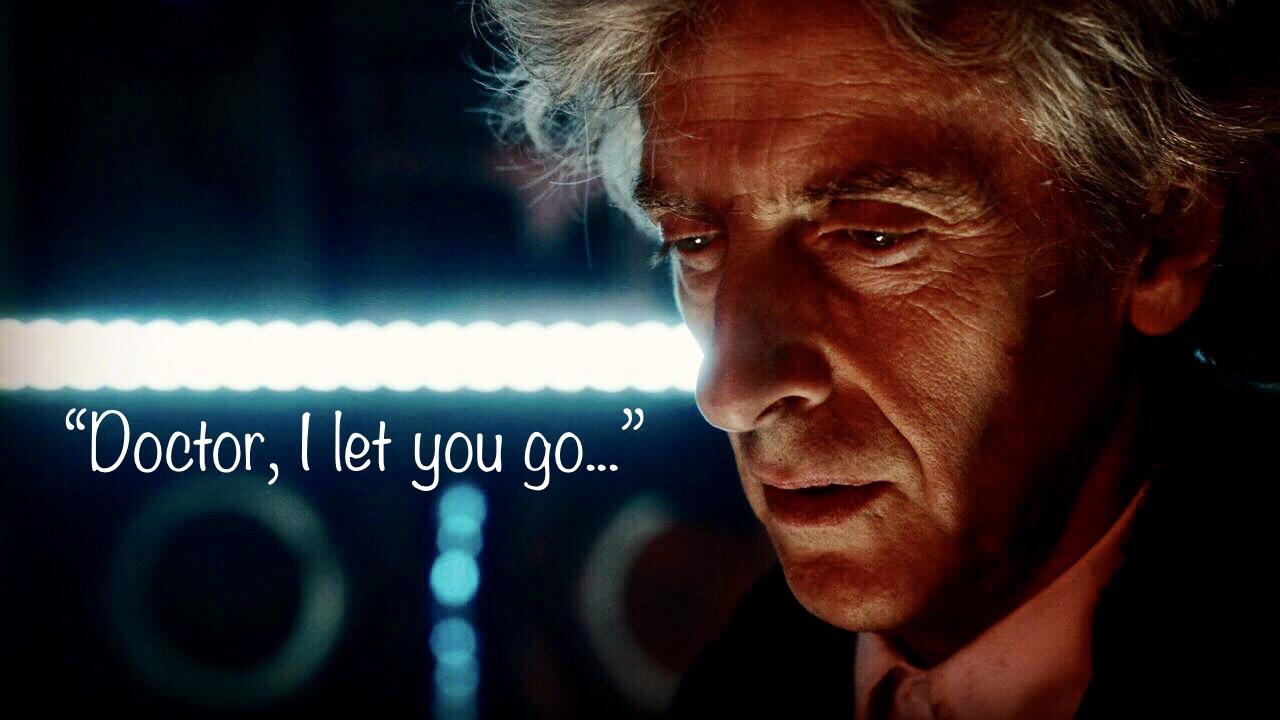 Me flipping out about Thirteen being a woman (gonna be honest, was very close-minded about it at first, not cool): 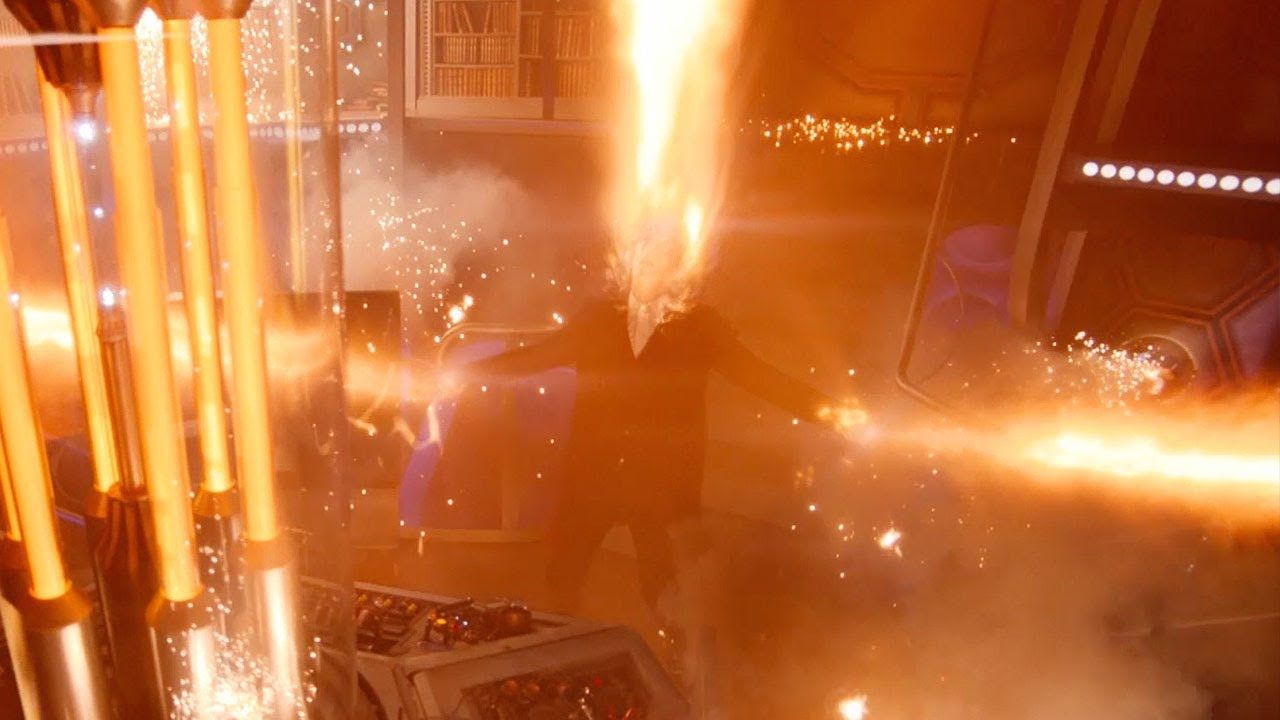 Me calming down, adjusting to the change, and realizing this is actually a good thing, with subsequent same reaction watching The Woman Who Fell to Earth: 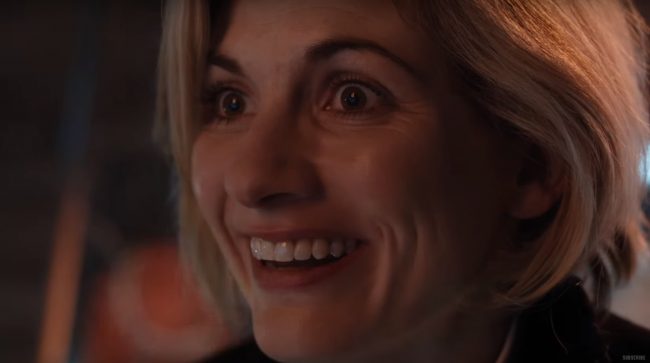 The Ghost Monument and the majority of Season 11:

My mind after Season 12 is great and The Timeless Children drops its big twist and cliffhanger:

This article by Moray Laing goes over everything that happened to the Doctor in Series 12 - not just the big reveals, but some nice references to previous stories as well.

‘Doctor Who’: The Secrets, Shocks and Lies of Series 12Fandom

Share your thoughts on that explosive season finale, and your predictions for where the Doctor will venture next season. 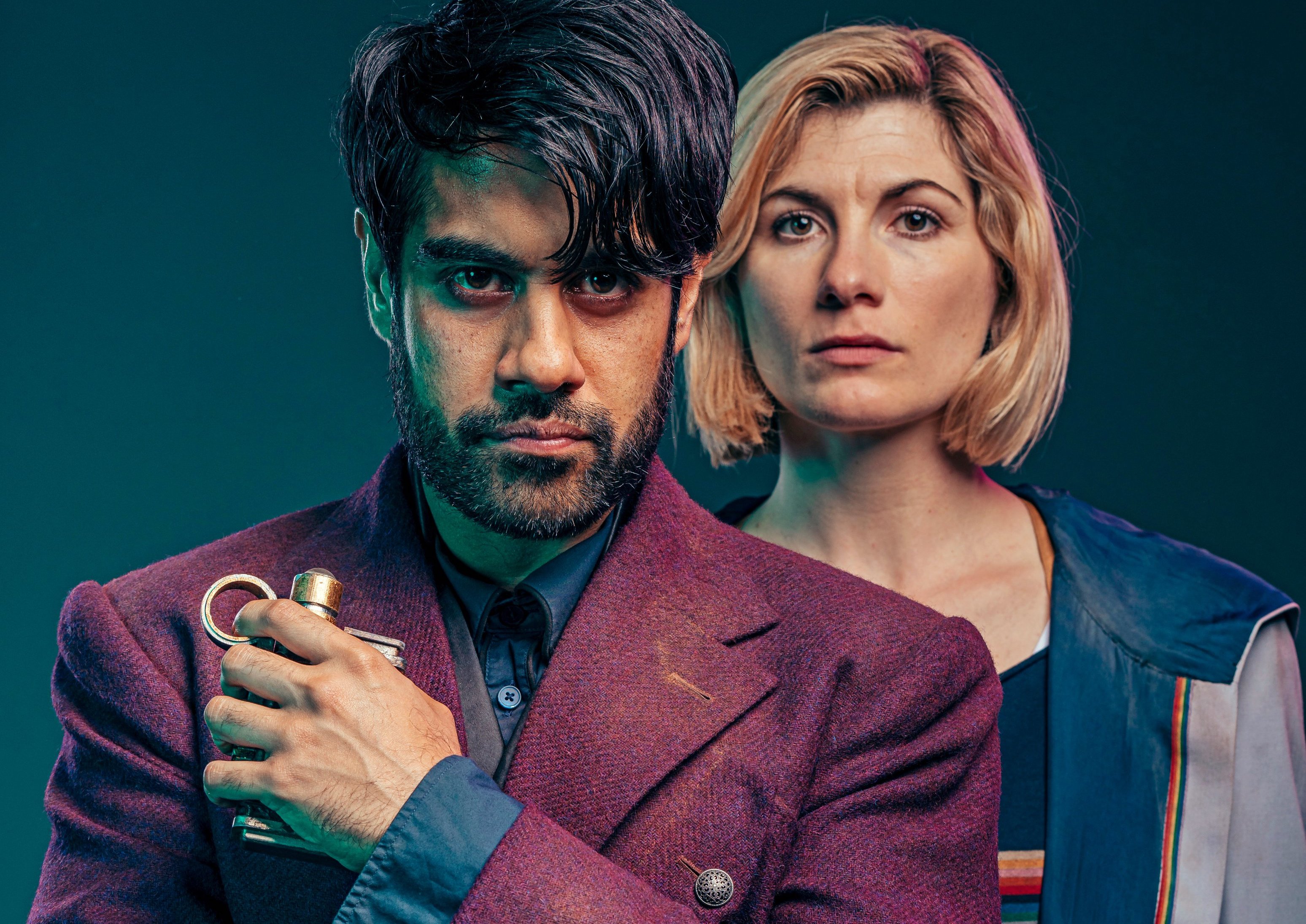 I guess it's a good thing we never got to see the Cartmel Masterplan. I mean, I know it's in the Virgin New Adventures, but like...wow, that was weird to see on television. It's like when Kevin Clarke came up with the idea for "Silver Nemesis" - Who is the Doctor? The Doctor is God.

I don't want the Doctor to be God. The Doctor is special in his/her own way, and at least with the Other some distant past incarnation helped create the Time Lords, but this Timeless Child being responsible for all Time Lords and regeneration...I don't like it, and you can always retcon it later, I guess, or change it, but then it's been reiterated everything's about to change. The Doctor is the reason there are Time Lords, being from another universe wherever the "true" Time Lords are, and has lived for however many lives, none of which we'll know for sure, so good luck making those stories Big Finish.

Watching Cybermen on Gallifrey and the Master offering an alliance just kept making me think of "Supremacy of the Cybermen" which was far more entreating. What is this insistence on putting the Cybermen and the Master together? I'm tired of Cybermen being subservient to the Master. I'm tired of "delete delete." I'm tired of that stupid way the Cybermen march together and that marching sound effect. And the Doctor did a great job in this episode, the way she stood there and listened and watched.

There are two great things from this episode: the Morbius flashback (because classic series is cool and it ties in with previous lives) and the Master quietly lamenting he's still alive. I don't like this Master at all, all I see is John Simm being a lunatic, but that moment where you see a deeper part of him that's suicidal, that stood out.

So...yeah, I think I'm gonna take a break. It'll be like the classic series, I'll read the wikia without seeing any episodes. It's not like "Dinosaurs on a Spaceship", that story actually made me rage-quit for a year. I just haven't cared for the last few seasons and this episode just made me feel tired.

My mind was still blown because of the fact

That The Doctor is The Timeless Child!

To celebrate the return of my favorite Doctor Who antagonists in Season 12, here are the moments featuring the Cybermen that scared me the most:

5. "Let us see what the future holds." - Assimilation² 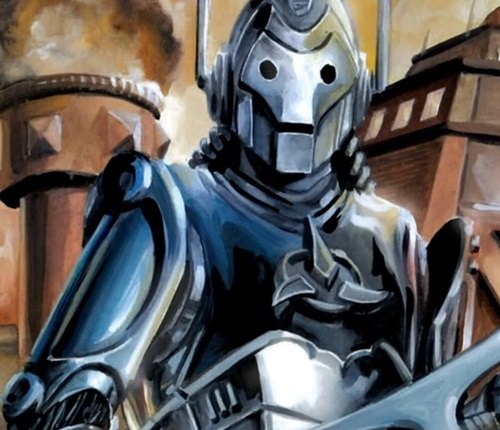 Kind of a cheat, but still very much effective, the Doctor Who/Star Trek crossover comic, Assimilation², is still canon and worthy of a mention. When the prime Star Trek universe and Whoniverse were merged by the Cybermen, the Borg contacted the Enterprise to assist them in defeating them. When Captain Picard refuses to accept the Borg's assistance due to personal history with them, the Eleventh Doctor takes him to see a future where the Cybermen have conquered the Whoniverse and prime Star Trek universe. While it is neat to see Cyber-Vulcans and Klingons alongside Cyber-Slitheen and Judoon, it's important in the story, and truly shows the horror and danger of what will happen if they lose. 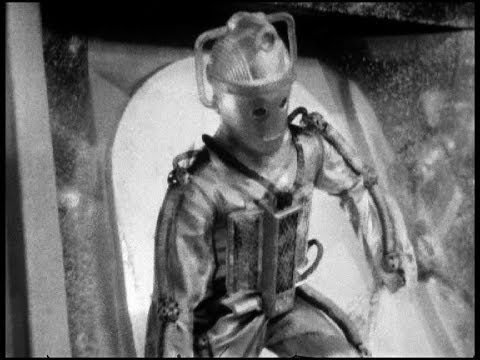 Although The Tenth Planet is my favorite classic Cybermen story, their scariest moment has to be in The Tomb of the Cybermen. An expedition to a tundra joined by the Second Doctor and his companions reveals a Telosian Cybermen tomb, filled with sleeping Cybermen. Once uncovered, they break their way out of the tomb. While you can make the argument to it being goofy retro sci-fi, the slow way they awkwardly push their way out of the plastic just looks wrong, making the viewer uncomfortable in all the right ways.

3. "I slit their throats once they joined the resistance!" - The Haunting of Villa Diodati 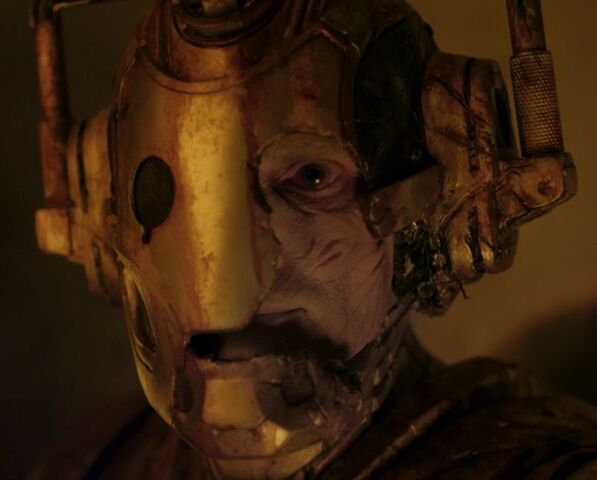 While there's definitely something to be said for nearly all of his moments in both this episode and Ascension of the Cybermen, The Haunting of Villa Diodati had the scariest moment of the Lone Cyberman so far, at least in my opinion. When the Lone Cyberman meets Mary Shelley, she asks if he had children, trying to comfort him and stop his rampage. He seems to listen at first, answering that he did have children. Then he grabs Shelley by the throat and lifts her off the ground! "I did have children," he says, "I slit their throats when they joined the resistance!" Need I say more? 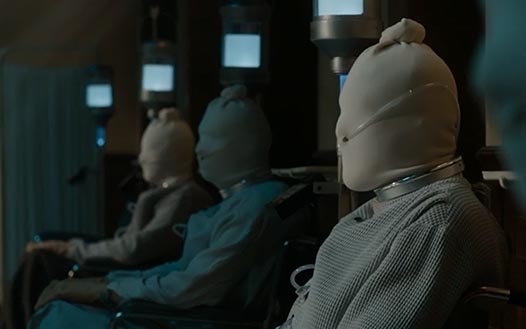 Let's be honest, I could have picked about seven different moments from World Enough and Time, given that it is my favorite Cyberman, and Twelfth Doctor story, of all time (coupled with The Doctor Falls, of course), but this one still chills me to the bone every time I think about it. When the Doctor, Missy, Nardole and Bill land on a Mondasian colony ship, they encounter the Patients, dying Mondasians who aren't fully converted yet. Because of this, their emotional inhibitors aren't activated, and all they can say is, "Pain." Look at these things. Imagine them robotically and slowly saying "pain" over and over again, emotionless but somehow still hurting. All as they slowly walk towards you. I just gave you nightmares for a year. You're welcome. 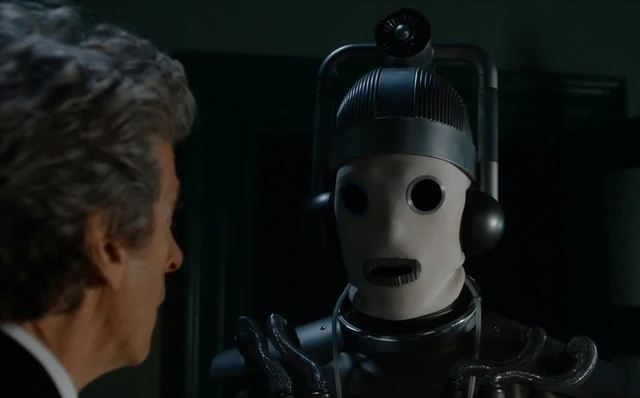 How could it be anything else? The cliffhanger in World Enough And Time is the best in Doctor Who, and is made all the more horrifying by the revelation that lovable companion Bill Potts was converted into a Cyberman. Searching for a missing and wounded Bill, the Doctor and Nardole come across a fully converted Cyberman. The Doctor backs away from it as it lumbers toward him, asking it where Bill is. After much scanning and locating of its neural net, it gave the blood-chilling answer of "I am Bill Potts." Many of us watching the episode (myself included) already knew it was coming ("We've got something for that..."), but none of us wanted to believe it, hoping it would be a trick. But these words sadly and horrifyingly confirmed our worst fears: Bill Potts was lost to the Cybermen, and while she was (sort of) restored in The Doctor Falls, she would never be the same, and soon after, she left the show for good. It was a brilliant twist and the scariest Cybermen moment to date, beating everything I already listed AND everything in last night's episode by a landslide. Swear to God, I haven't had a good night's sleep since June 24, 2017.

What do you think? Are there any I missed? What Cybermen moment terrified you the most? Jackie's conversion? Adric's death? One of these? The alliance with the Borg? Let me know! I'd love to hear your thoughts! 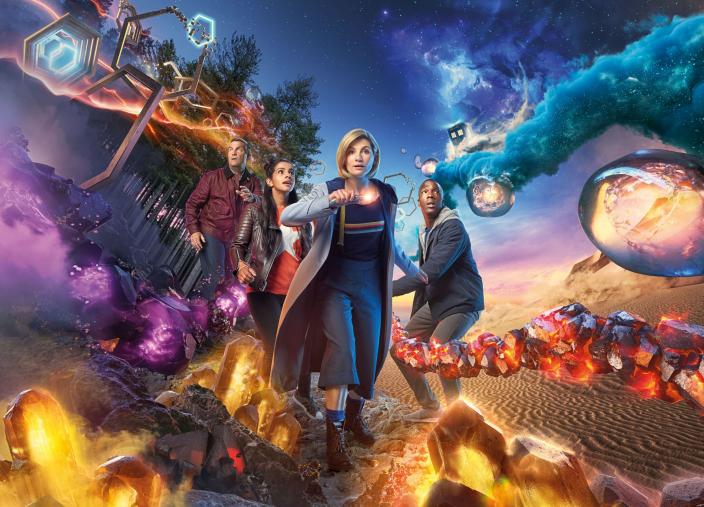 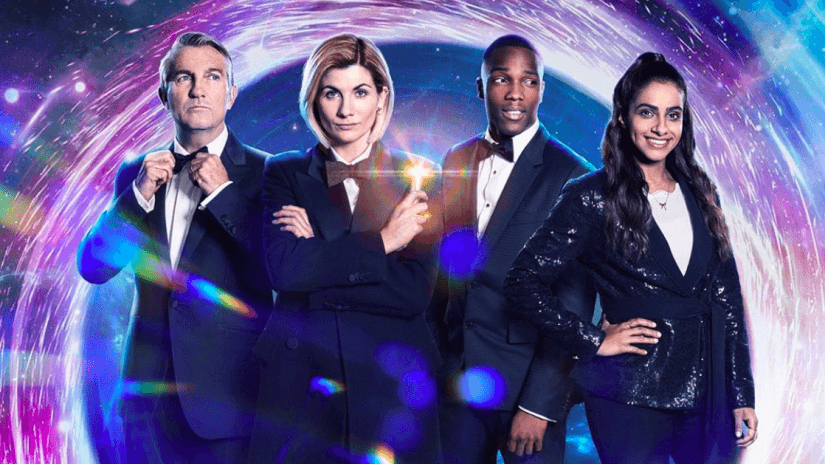 So, I live in the U.S. and don’t have BBCA, so i have no way of watching the new season yet. BUT I AM subscribed to the Doctor Who Youtube channel. They uploaded 2 videos on the return of Jack!! So it was spoiled for me!! Also going on here spoiled even more, but not as big as the spoiler that JACK HAS RETURNED

Well that was a well kept secret 👏👏👏